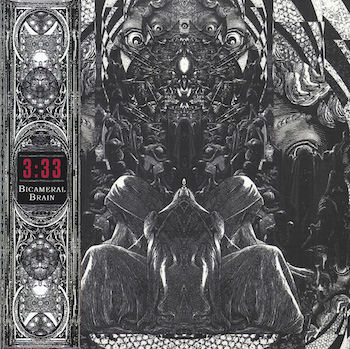 3:33 has a tradition of scheduling release dates as close to Halloween as possible, as evidenced by prior albums such as “Live From the Grove” and “In the Middle of Infinity.” Their latest project “Bicameral Brain” is no exception, having been set for release on October 29th, and at this point I fully expect a new album around October 31st of 2014 – though perhaps not as long as this one.

Peeling back the layers of this “Bicameral Brain” we find the core consciousness comes from the production work of Parallel Thought, though this is shrouded so carefully you could not be blamed if you didn’t see it. Both the artwork and the music of a typical 3:33 release imply something dark and occult – perhaps even evil – and “Bicameral Brain” is no exception. Even the press release is plotted like a horror movie, implying that an unseen hand guided by the machinations of a mad scientist split 3:33 right down the middle. “The resulting Bicameral Brain was comprised of two parts – one side spoke commands in the form of auditory hallucinations and the other listened and obeyed.”

There’s an intentionally mad/maddening comedy to the track listing, which leads to the lead single as such being entitled “BB2-1.” The numbers match the track order if you were to rip the physical album and serve no other purpose, except to suggest 3:33 only reluctantly labeled the tracks and did so in the most “fuck you” manner to the music world possible. The thing is they’re entirely right to do so – these are not songs which need naming. What you hear on “Bicameral Brain” is the instrumental soundtrack to the most gothic movie never made. “BB2-1” obeys SOME conventions of music structure: an intro, a strong drumbeat, a breakdown between halves and a return to the beat, but all without any narrator or explanation. A wavering bass tone is layered with hissing sounds, shrieked notes, rustling leaves and a generally thematic air of doom and despair. These all drift away until one is left with the echoing of a drum whose skinhead is too tight, blending seamlessly into the equally nameless track that follows.

At this point you’d be fair to ask “What’s the point of a 3:33 album?” One might ask the same thing of a “Halloween” or “Aliens” movie. Human beings crave sensory experiences, even those that seem contrary to self-preservation, just for the heightened sense of awareness they bring. A good scare can make reality “more real” – causing your whole body to respond physically as your irrational brain gives you the primal “fight or flight” response that can’t be bred out or easily intellectually quashed. A 3:33 album gives you so little to grab ahold of that it plays to one of humanity’s greatest fears – the unknown. You may at times hear a toe-tapping beat and try to cling to it, but the odd noises and eerie sonic landscapes unclench it and leave you free falling. This is as safe as horrifying gets though, because just like a good zombie movie, you’re still going to walk away at the end knowing it’s not real. Buy the ticket, take the ride. 3:33 is jarring and scarring and best experienced in a totally dark room.