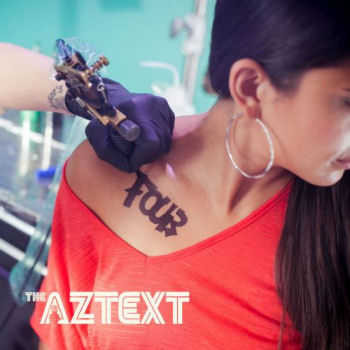 Anthony Fredianelli, the former guitarist for San Francisco band Third Eye Blind, was just awarded $450,000 because the band failed to pay him tour income he was owed. The details of the lawsuit revealed that Fredianelli was paid $1,000 a week on retainer and $1,750 when the band was touring or recording. That means that the most he was able to earn in a year was $91,000 before taxes. In other words, the guitarist for a successful major label rock band makes almost as much as a mid-level manager or executive assistant, but without the benefits or any future earning potential. To put that in perceptive, $91,000 a year is almost enough to afford renting a one-bedroom apartment in San Francisco, which average around $3,000 a month. Maybe being a musician is not exactly a one-way ticket to unimaginable wealth.

Burlington, Vermont hip-hop group the Aztext know all about that bad math. 2013 marks their eighth anniversary, and a lot has happened in those eight years. For one thing, MCs Pro and Learic went from being in their early twenties to their early thirties, picking up a girlfriend and wife in the process. They went from roommates whose lives were solely devoted to making music to responsible adults with full-time jobs who have to squeeze in gigs and studio time around other demands. Hip-hop has changed too, and the old school style they made their name with on their early albums has been eclipsed by newer styles and technology. Even their DJ, Big Kat, ditched his heavy vinyl records for Serato. Despite the fact that they have opened for big name indie acts like Brother Ali and hip-hop legends like Slick Rick and the GZA, the Aztext have discovered that being a successful musician pays less than most day jobs.

So they changed their approach to making music. Rather than trying to keep up with trends or make an album that would guarantee radio play, the group recorded “Four” with the intent of having fun and pushing themselves artistically. The result is an album full of honest examinations of what it means to be a musician.

The Aztext have always had songs with them singing the hook, but they go even further in that direction on “Four.” They sing a lot of their verses on “Put It On Wax,” “All I Know,” “Driftin’ Away” and “Just Bein’ Me.” This gives the album a musical quality that is a marked change from their earlier albums, which were old school leaning. Not that they don’t still sound like Vermont’s answer to Black Star on the album. They haven’t given up on their commitment to lyricism and proving themselves on the mic.

They start things off by addressing the state of the music industry on “Press it Onto Wax”:

“We don’t press it on the vinyl none
Cuz they ain’t trying to hear that vinyl no more
Fuck cassette sales, they’re final
CDs they ain’t buying those
Better put your iTunes up”

“All I Know” has what sounds like a sample of Grizzly Bear’s “Two Weeks,” with the MCs discussing their impact on the local music scene after running into a fifteen-year old who had been a fan since he was nine. They go further in question their legacy on “Driftin’ Away”:

“Did we fail and let everybody down?
Did we do enough to make them all proud?
I got one job that pays me
And one that makes me smile
Should I quit and go broke just to spit our flows out?”

The album is produced by the Aztext, Dub Sonata, Soulslicers, Whatson, E. Train, Shuko, XPL and !llmind. Most of the songs combine melodic elements with banging drums. The one exception is “Drunk,” a synth heavy club rap song that gives the duo an opportunity to show off their double-time skills. It’s the track where the Aztext are most out of their element, and proves that they aren’t going to knock 2 Chainz off his crown anytime soon.

At one point the Aztext mention meeting an old friend who says that they should have had Macklemore’s success. Both the Aztext and Macklemore and Ryan Lewis might be white guys who make independent hip-hop with some pop leanings, but the similarities end there. Macklemore and Ryan Lewis take a much more theatrical and hipster approach to hip-hop. The Aztext sound like two guys who grew up listening to Tommy Boy and Rawkus Records, and make music that pays tribute to that sound. That might not be a one-way ticket to unimaginable riches, but it does make for some solid hip-hop. Here’s to hoping that the Aztext find a way to keep balancing the job that pays them and the job that makes them smile.