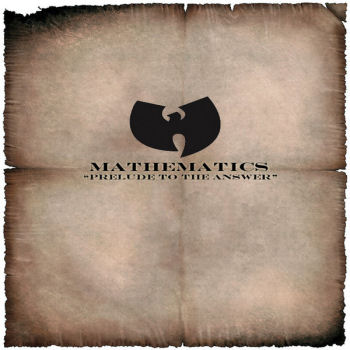 Mathematics :: The Prelude to The Answer

As much as RZA helped craft the Wu-Tang sound during the 90s, his recent work tends to be less memorable and certainly more irregular. Thankfully, the Wu were so influential on young emcees and producers that there are STILL new artists emerging with that Wu-Tang sound in 2013, but with twenty years having passed since the world first had to start protecting their necks, Ghostface remains the primary torchbearer for the Wu. With Adrian Younge offering a live instrumentation take on the usual Wu sound, it proved that the brutal, uncompromisingly raw style we know and love is well and truly alive. While RZA has focussed on his movie ventures, the traditional Wu-Tang production duties fall back on Bobby Digital’s friends Mathematics, 4th Disciple and True Master. There are numerous others of course (Bronze Nazareth being a personal favourite), but these three spring to mind when I think Wu-Tang beats. Seeing as this review is on a Mathematics record, let’s remind ourselves why he is ever present in the Shaolin spectrum. Having helped establish the Clan from the start in 1993, Mathematics worked on numerous tracks in the 90s, including (allegedly) the huge single “Gravel Pit”, but didn’t get his own record until 2003’s “Love, Hell or Right”. Despite a third of the record being dreaded skits, he returned two years later with the superb “The Problem” â€“ a few songs featuring in the popular video game series “Saints Row”.

Mathematics’ third album, cunningly named “The Answer” has been delayed throughout 2012 and 2013, but was recently unleashed on Itunes to little hype, if any at all. To try and wake up the many rap fans sleeping on Mathematics’ talents, “Prelude To The Answer” was released with the majority of the Clan appearing alongside Termanology, Redman and Ali Vegas. They all drop fairly forgettable contributions, with the emcee Eyes Low dominating the record. He appeared on the Mathematics albums before this, but having to listen to him on 10 of the 12 songs, (making this more of an outlet for him than Mathematics himself) stops this from being a true collection of Wu-Tang Clan members and affiliates. He’s not exactly Wu-Tang level, devoid of character when placed alongside an aging Method Man and Raekwon on “Men of Respect”. When six songs are solely Eyes Low spitting to a Mathematics beat, it turns to regular street rap, which just isn’t that interesting without that extra “Wu” aspect. There’s no chess metaphors, playful flows or wild vocabulary here; “Prelude to the Answer” just raises one question â€“ where’s the Clan at? To be fair, they do appear on “Face the Problemz”, although GZA sounds like he recorded at 5am; it’s a sleepy performance even by his mellow standard. The fact that it’s a RZA beat anyway, and it’s billed as the whole Clan when only GZA, Raekwon and Cappadonna drop a verse is hugely disappointing.

Eyes Low’s limited subject matter coupled with Mathematics’ throwaway productions (“Men of Respect” is really the only track with sustained replay value) renders this mixtape a forgettable entry in the bottomless chasm of Wu-Tang releases. Intentions were to hype the incoming “The Answer” album but I’m questioning even checking for it after this collection of leftovers.

Mathematics :: The Prelude to The Answer
2.5Very Poor
Music2
Lyrics3