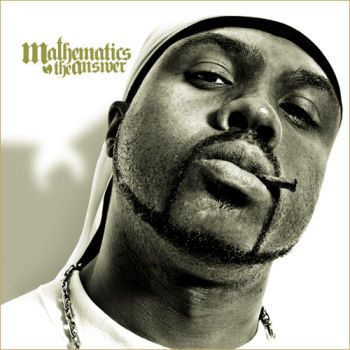 With RZA working on films (not just soundtracks but DIRECTING) it’s always nice to hear some Wu-Tang Clan artists with that staple sound. Mathematics has never really embraced the whole martial arts theme as much as Bronze Nazareth did on “The Great Migration”, but his authentically east coast style of production is always welcome. It’s a shame then that this album is one of the most disappointing releases of 2013, an album that starts off well yet veers off in to a time warp, bringing back with it a combination of beats and rhymes over ten years out of date. Right from the off, “Cousin Jackson” lets you know this is the intended material Wu fiends were supposed to be consuming.

Mathematics laces Yay High and frequent collaborator Eyes Low with his trademarks; strings and pianos. Meth rolls back the years on “Four Horsemen” (with no sign of Killah Priest!), a track which sees Ghostface, Deck and Raekwon also proving the doubters that they can still sound hungry. Mathematics provides a beat that will divide you purely on the choice of snare, but it isn’t the only example of mixed results. “Cocaine” sees Method Man dust off the rust to show just how natural his voice is for hooks, along with a decent verse too â€“ but from there it all goes a bit tits up.

Redman throws together as many examples of his age as possible on “Notorious”, making references to Nikolai Volkoff, the film Face/Off and the Bee Gees. Considering these are some of the better uses of simile (the worst being “I’m Notorious like B.I.G.”), and that Mathematics goes for a played out production, help raise my initial worries for this album. This record sounds dated â€“ it actually sounds older than 2005’s “The Problem”. There’s constant references to Biggie and Pac, a bunch of dumb skits and worse of all, substandard production. Mathematics has clearly tried to expand his palate with more soulful efforts “Ratha Smoke Wit U” and “Shorty”, but come off as corny when delivered by emcees in their mid-forties. The final nail in the coffin is the song about blowjobs: “Bitch Never!” which admittedly has a classic ODB vocal snippet and some hypnotic crooning from 12 O’Clock, but the rhymes are typically cringe worthy.

Mathematics’ “The Answer” only raises questions. Why has it taken so long to see the light of day, and then been released with no real promotion other than the Redman-laced “Notorious” video? Take away “Men of Respect” and “Four Horsemen” and you have a bunch of tracks that are mixtape standard, if that. I thought the prelude to this album was weak, but this has left a sour taste, especially after Mathematics had proven his worth on previous work. He’s not a great producer, but certainly capable of crafting dope posse cut music, which suits the Wu to a tee. Unfortunately, “The Answer” won’t satisfy Wu-Tang fans, let alone the wider hip hop audience, unless you feel like spending money on a collection of lacklustre beats and rhymes. Do the math.