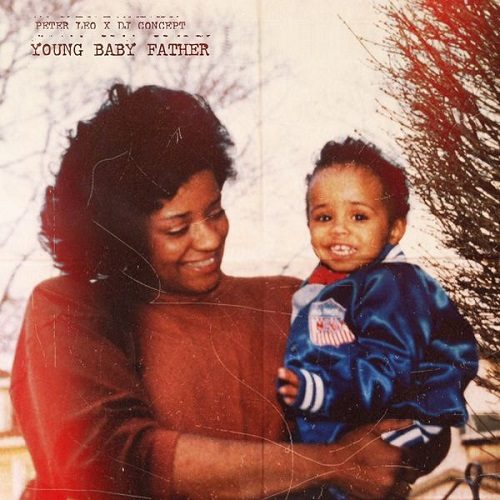 I was on the fence about DJ Concept as a producer until I heard his “M99: Dexter Beat Tape,” at which point I realized he had some potential and promise. Concept took the instrumentals of a show about an grim anti-hero serial killer and injected some hip-hop style and personality into them through his personal rearrangement. It was a natural given how many people in the arts I’ve heard say they are fans of the show, but to my knowledge Concept was the first to go for broke and actually do it – he gets the props.

Much like the “Dexter Beat Tape” his new collaboration with Peter Leo is a free download, although for the former it was probably necessary for legal reasons (Showtime may not like it but if he didn’t “profit” per se he’d be less likely to get a nasty legal letter). With Peter Leo he finally seems to have found the right voice to match with his music, and with “Young Baby Father” Leo has found the right theme to rap over Concept’s beats. The seven songs of this EP all revolve around the responsibilities of fatherhood to some degree, including the trials and tribulations of hustling to make ends meet on “Gotta Escape” and potential legal ramifications.

“Got a wifey, and a girlfriend
And a soulmate, and a new date
But niggaz is broke and it’s only getting worse for us
Liquor and smoke is the only shit that works for us
Stick-ups and dope when they purchase while they searchin us
Now all my friends is gettin jobs, I’m feelin purposeless
The worthlessness is settin in, Earth is the surface that you spin
And time is winning, when’s the end?
And nah I ain’t complainin, but when your heart is palpitatin
Stress is what remains…”

At only 23 minutes long there’s not a lot of time to get to know Peter Leo, but I like what I hear here. “Oh Baby” is a salsafied “hood tale from the streets of Brentwood, New York” with Peter flowing smoothly about one of his various escapades – only to find out two months after doing the deed that he’s a baby daddy. At first he’s in denial and believes he used a rubber, but “Now that I think back, maybe I ain’t check that/plus I was leaned back from sipping a six pack.” That’s how it happens. “Cycles of Life” featuring Rich Rivera is a more serious take on fatherhood, talking about how baby mothers give up on baby daddies who are dead broke, only to have their daughters grow up to be hood rats. I’m not saying that’s a 100% guarantee, and neither is Peter Leo, but when he says “the cycle of life comes back around” it’s something worth contemplating.

By sticking to the theme throughout the short “Young Baby Father EP” both Peter Leo and DJ Concept get my respect, and “Liquor Store” is a short but powerful song wrapping it all up on a high note, as Leo kicks the Henny to the curb and says offers this sage advice: “Imagine seeing your son for the first time locked in the max/that scene is lost for eternity, no getting it back.” It’s not a preachy album, it’s just some real life scenarios for you to think about. Leo is a narrator and not a sermonizer, and the role serves him well over Concept’s bubbly and jazzy beats. It’s worth a download.