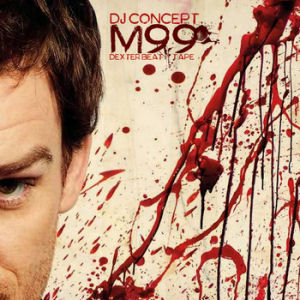 His name might beConcept but the meaning behind this album is not too complex. In fact there’s no disguising or hiding it – we’re celebrating fictional serial killer Dexter Morgan on this one. Now if you haven’t followed the show and/or don’t have a subscription to Showtime, don’t worry, there’s only one key thing you need to know for this review. Our producer slash DJ may not have made the concept complex, but that doesn’t mean our protagonist Dexter is a simple man. In fact as TV characters go he may be the epitome of complicated, ranking right up there with Dr. House, and not entirely dissimilar in their sociopathic and self-centered tendencies. Dexter believes he kills for a cause, and justifies his bloodlust by the wickedness of those who he knocks off.

Now you’re screaming “House doesn’t take lives, he saves them!” You’d be wrong. House saves those he deems WORTHY of being saved, but his moral compass allows him to turn a blind eye as his subordinates kill an African dictator “for the greater good,” then participate in a cover-up after the fact. In each case, the character portrayed has what can ultimately (but perhaps somewhat too easily) be called a “God complex,” that they are endowed with the inalienable right to decide who should live and who must die. The viewer has to be aware at all times that their charming personas are part and parcel of a sociopathic personality. Well “charming” might be arguable to the colleagues of Dr. House who he berates, but then again it’s his ability to turn it on and off like a light switch at his discretion that causes his co-workers both fascination and frustration. Dexter too has a facade – a devoted father and family man, a skilled co-worker, but some people can sense there’s something “off” about him.

Through six seasons of his hit TV show, people have cheered for Dexter Morgan as he killed evil sadistic menaces, but have also wondered what Dexter would do if he ran out of evil people to kill. Therefore to say DJ Concept’s “M99: Dexter Beat Tape” is a celebration of the man would be a naive mistake. Created entirely from samples taken out of the show, there’s no denying that the sound of these 9 songs is dark and ominous – save perhaps for the somewhat comical “Butter Face.” When you peel back the layers to these beats though, you see that if Dexter can be read as a comedy, it can only be the blackest and grimmest among them. On songs like “The Mask Is Slipping” you hear vocal snippets of Dexter confronting his own darkness, and admitting he revels in the evil. Never does Dexter feel as happy or as free as when he takes another man’s life, and he’s smart enough to know that SHOULD be wrong, but sociopathic enough to ultimately not give a shit.

Now we have spent an inordinate amount of time discussing the show this album is based on so far, but since there are no “lyrics” per se here the show’s the thing that fuels what we are listening to. The truth is you don’t need to have ever watched a single episode to appreciate the music. The clip-clopped drums and tinkling ivories of “You Stole My Life” are some mellow smooth shit for criminals to move with. “Explore New Rituals” is even more heavy on percussion, but strikes an ominous overtone that seems perfect for the Halloween season (not to mention Dexter calmly discussing he’s watched 67 people die). This is hip-hop with a psycho edge – the calm but deadly breeze that sails through the backdrop of “Jordan Chase” lets you know the shit can do down at any time. It’s only 30 minutes of free music, and yet much like an episode of the TV show, you’ll find it hard to tear yourself away.