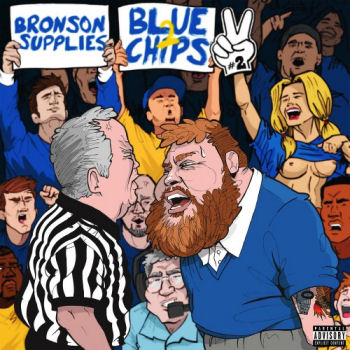 I’ll admit this straight out the gate, I’ve never been a fan of Action Bronson. Having heard his project with Statik Selektah, I was unimpressed and find his voice has rarely stood out on the numerous collaborations he has featured on in the past few years. The reason I’ve chosen to write about the latest Action Bronson mixtape is to prove that if you didn’t enjoy his previous work, give this FREE mixtape a chance because I have been converted to Bronson’s brand of abrasive hip hop.

The Ghostface Killah influence is undeniable (particularly in the constant pop-culture references) and while he can certainly spit, his abrasive language and wild imagery has usually included some stupid shit to spoil it. “Blue Chips 2” is no different, but is musically so diverse compared to the likes of “Well Done” and “Saaab Stories” that Action’s appeal becomes more likable. Just as Ghostface excels over quirky production, whether it be from his Wu-brethren or this year’s marvelously dark “Twelve Reasons To Die” by Adrian Younge, it most certainly adds to the package.

There can’t be many current emcees willing to rhyme to a guitar on “Pepe Lopez” the way Bronson unashamedly does. The Wu-Tang comparison re-emerges on “The Don’s Cheek” with Bronson sharing a tale of money, drugs and respect not too dissimilar to the original Chef, Raekwon. The real star is the scathing, Oriental loop that just doesn’t get old no matter how many times I rewind that shit. Musically, “Blue Chips 2” has a bit of everything whether it be beat jacking in the form of The Pharcyde’s “Passin’ Me By” or the multitude of 80s pop including Phil Collins (!) on “Contemporay Man”. Party Supplies provided these fun, nostalgic backdrops on the first “Blue Chips” mixtape and they’ve nailed it once again. Bronson does calm it down on “Midget Cough”, and the last few songs see him straying towards more comfortable, traditional backdrops. The final track “I Adore You” is oddly touching, primarily in the way a large, hulking, ginger, white man honestly reflects on a lady he adores, but ends up being another cheap lay. It’s a great way to end the carnage of “Blue Chips 2”, a healthy reminder that Bronson is willing to make light of his wild tales, whether it be through wacky imagery, crude language or self-deprecation. There aren’t many emcees that would think to rhyme “truck driver” with “muff diver”, and that can only be a good thing.

With mainstream hip hop lacking real characters that provide entertainment value, Action Bronson is unique in that he has captured the imagination of thousands while still remaining lyrical. A dream project for me would be Action Bronson and Roc Marciano; two emcees that possess an unrivaled attention to detail and a knack for writing raps that keep you on the edge of your seat. Just as Roc Marciano took over a decade to discover HIS sound â€“ the street storyteller with class who shares his impeccably described tales atop atmospheric instrumentals more in line with soundtracks than hip hop beats â€“ Action Bronson’s character is delightfully goofy, like Raekwon and Ghostface’s apprentice that still parties and talks shit when he should be at work. Thankfully for us, this IS Bronson at work, and “Blue Chips 2” is his best yet. And it just so happens to be free, so you’ve no excuse to sleep on this.