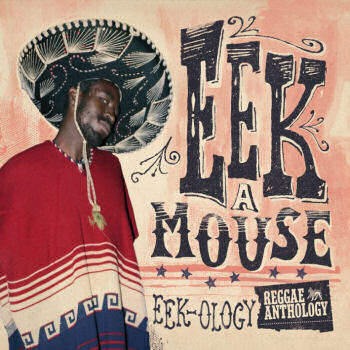 “Eek-Ology” collects 33 songs and a DVD of a live performance from the distinctive singjay Eek-A-Mouse. Born Ripton Joseph Hylton, he got his stage name from a horse he used to bet on. He started recording in the late seventies, but came into his own in the 80s, recording a string of hits with Joe Gibbs, Linval Thompson, and Junjo Lawes. He was one of the first artists to be branded a “singjay” for his combination of singing and deejay chatting. He is perhaps best known for his nasal delivery and goofy ad-libs. This, combined with his name and tendency to wear costumes, might lead you to believe that he is not a serious artist. “Eek-Ology” shows that there is another side to Eek-A-Mouse.

His goofy side shines loudly and brightly. Eek-A-Mouse constantly interjects “biddy-bong-bongs” into his rhymes, making his songs equal parts patois and gibberish. His early hits “Wa-Do-Dem” (represented here as an early version “Virgin Girl” as well as a BBC recording) and “Anarexol” are silly sex songs. Eek-A-Mouse’s nasal delivery is in full effect, and he biddy-bong-bongs his way through the tracks. This is the Eek-A-Mouse I was familiar with: fun, odd, and not to be taken too seriously.

What I was not prepared for was how sincere and thoughtful many of the songs on “Eek-Ology” were. When he isn’t busy clowning around, Eek-A-Mouse can be a convincing roots singer. Many of these songs sound like Horace Andy tracks as Eek-A-Mouse tones down the falsetto and gets real. “Creation” and “My Father’s Land” are both heavy roots songs. “Ganja Smuggling” and “Operation Eradication” are serious protest songs, with Eek-A-Mouse combining his scatting and affected singing with serious topics.

The mix of serious and silly works well for Eek-A-Mouse, keeping him from being either too frivolous or too somber. Even with the mix of styles, the compilation suffers a bit from a sense of sameness. This is partially because there are versions of his hit songs included that use the same riddim for multiple tracks. Also, with the exception of some of his late-period material that closes Disc Two, most of the songs here are stripped-down mid-tempo riddims. Similar to the Yellowman compilation released by VP earlier this year, “Eek-Ology” suffers from being too much of a good thing.

I’m not an Eek-A-Mouse aficionado, so I can’t speak to how well this compilation captures his essential songs. As a casual fan, it may have been a little more Eek-A-Mouse than I needed in one sitting, but the bargain price and string of solid songs make it well worth picking up if you are interested in an overview of his work. It had the added bonus of being excellent children’s music: my baby daughter would squeal with delight whenever Eek-A-Mouse started scatting. So whether you are having a sensi party or kicking it with a ten-month old, “Eek-Ology” has you covered.