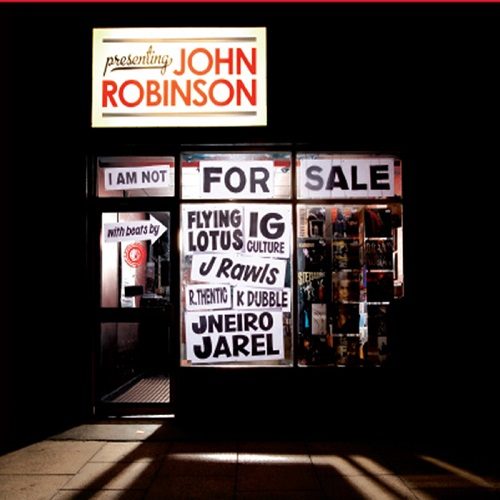 John Robinson :: I Am Not For Sale

I’ve always been a sucker for rappers who go by their government names. In a genre that places a premium on larger-than-life personas, opting to be known by the name your mama gave you seems like a good sign that you’re not getting caught up in the hype. Tupac and Nas did it to a certain extent, but I’m talking more about Erick Sermon and Joe Budden, guys content to forgo the over-the-top naming trends and let their music speak for itself. Don’t get me wrong â€“ I never tire of all the Wu-Tang nicknames and think it’s a good way to keep outsiders at arm’s length, but sometimes there’s something to be said for keeping it low-key.

John Robinson hasn’t always gone this route. He was originally known as Lil Sci of underground faves Scienz of Life, although he has since used both his stage name and proper name in solo releases. Now, with a popular mixtape circulating the internet (“Who Is This Man?” featuring well-known beats by MF Doom), Robinson has dropped the moniker in favor of his real, honest-to-goodness name.

With a stellar line-up of producers contributing to the project, it’s easy to see why he wouldn’t mind the lower profile alias: quite frankly, he doesn’t need any extra bells or whistles to draw attention to his album, as it has all the ingredients needed for success already. Featuring beats by J. Rawls, Jneiro Jarel, and this year’s instrumental it-boy Flying Lotus, “I Am Not For Sale” packs quite a punch musically, and the consistently mellow, jazz/soul vibe gives the album a smoothness that carries it through its short track list.

Robinson himself is an able emcee whose main asset is his apparent comfort in his own skin. He can kick and rip and flip an indispensable rhyme on occasion, but he is generally content to convey a mood with his lyrics and delivery rather than try to wow you with technical brilliance. His style is still squarely within the New York underground steez, but he seems completely unselfconscious about his rhymes and lets the aura of the music carry the day. With a raspy voice he likens to Nas mixed with the delivery of CL Smooth, his voice is another important factor in the enjoyment of the album and helps elevate it beyond your average East Coast backpack fare.

It’s not enough to have dope beats and rhymes, though. Bringing them together is the mark of an effective release, and this is where the album really shines. Everything gels on this one, from the moody opener “The Genesis” featuring Renee Neufville crooning over Carlos Nino’s plaintive keys, to the off-kilter Madlib impersonation of Jneiro Jarel’s “Vocal Overload.” And there are countless moments in between that demand repeated listens from true hip hop heads, whether overground or under. As expected, FlyLo provides the album’s most compelling moments, none more gripping than the string-laden paranoia of “Don King,” on which Robinson relates a story he was told by a woman he met on the bus who just happened to have been linked with the legendary boxing promoter. It’s a strange basis for a song, but it works to perfection as both the beat and lyrics keep you on the edge of your seat waiting for a conclusion that never comes. FlyLo further pushes hip hop’s liquidity boundaries on “Fly Prezidente,” layering sounds so exquisitely that you are propelled along as if by the hand of God by an instrumental that flows inevitably toward the sea yet is anchored by some heavy boom-bap. Robinson gets loose to blow his own horn on this one, managing to sound down to earth even as he touts his greatness:

“Hot damn, that’s what they say like soul brother
Hold up, serve him with bread, he’s so butter
He flip verses more free than no cover
And still touch the hearts of the people like no other
Travel at terrific speeds, swifter than a centipede
Does he give them what they need? No question, kid, true indeed
Known to turn the party out, collar flip with plenty clout
Don’t even pull your money out, he’s richer than a Guinness Stout”

Other highlights include the J. Rawls gem “Touch Em,” which finds Robinson making one of the few positive references to internet fandom you’ll hear these days, and R. Thentic’s “Dreaming Again,” which manages to turn what sounds like a ho-down fiddle riff into a bangin’ soul palette for Robinson to get his “rock star” on.

Singling out songs on this album is a bit pointless, however, as there isn’t a bad track to be found and everything flows together so well that you’d do yourself a disservice by not playing it in its entirety. One might possibly complain that there isn’t extraordinary depth to the project, but at 11 tracks and 33 minutes, “I Am Not For Sale” is brief enough to avoid having to cover all bases. So often rappers glut their releases with as many songs as they can cram in them, leading to a diluted product that feels stretched beyond the breaking point. John Robinson has carefully avoided this problem and has instead collected a set of songs that shows him in the best possible light. It’s rare to witness a musician realizing his full potential on wax, but that’s exactly what has happened here. In an age of big singles and throwaway albums, Robinson has crafted a complete work that speaks volumes for his integrity as an artist, fancy pseudonym or not.

John Robinson :: I Am Not For Sale
8.5Overall Score
Music8.5
Lyrics8