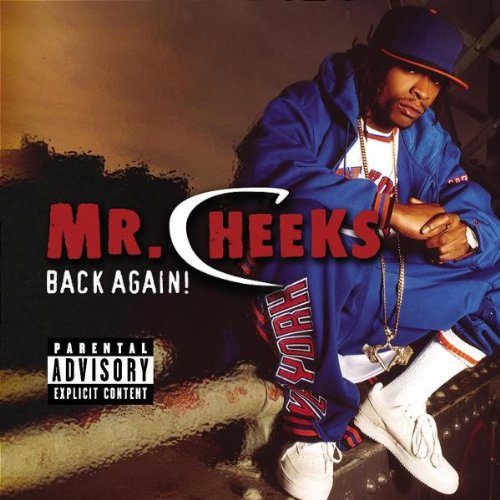 There’s a hint of irony in the opening chapters of Mr. Cheeks’ new solo album “Back Again!” It’s not in the fact that the rapper is back with his second LP in three years, the follow-up to his “John P. Kelly” album with it’s successful “Lights, Camera, Action” single. It’s not that he comes back a little more gritty and a little less commercial this time – the fact M.O.P. is featured on “The Hussle” should make that obvious. No, the irony here is that Cheeks can’t live down his reputation for saying stupid shit. In 1996, he won the New Jack Hip-Hop Award for Lamest Lyric with the line “She said she wants to be a lawyer, in other words shorty studies law” from the Lost Boyz song “Renee.” You would think the experience would teach him to put more thought into his words, yet after a decade in rap Cheeks still knows how to fuck up good. This time, he blatantly contradicts himself from one song to the next. Start with the opening track “Supposed To” where he speaks on originality:

“Bunch of niggaz runnin around, throwsbacks and fitteds on
These niggaz know who started the game, but you know
once niggaz start doin you, you gotta go do somethin else
Knahmsayin? Do bigger and better things
Switch lanes with bigger and better rings than niggaz
Big nigga shit, fuck ’em – y’knahmean?”

One has to wonder how Pete Rock & CL Smooth must feel then about appearing on “Reminisce ’03” immediately following, a Mr. Cheeks remake of their hip-hop classic “They Reminisce Over You (T.R.O.Y.)” Wait Cheeks, didn’t you just imply that imitation is NOT the sincerest form of flattery? Yet here you are rhyming over the exact same beat they made famous, which is about as unoriginal as you can get. It’s good to see the song brought back, but hearing Journalist and Mr. Cheeks flow over Pete’s creation will leave any old school rap head with a hollow feeling. Only CL’s appearance in verse three can bring the universe into balance:

“Uhh, how I reminisce, flippin this joint
Listen close as I prove my point
T to the Rrrah O Y’s why we always stay fly
What I’m spittin make grown men cry homey
For those who don’t know me, this is CL Smooth
down with Pete Rock for those who can’t see the block
We the key in the lock with no reservation
To all my fallen soldiers, a dedication
Cause I miss my pop, I miss my Uncle Doc
Tudy’s gone now niggaz know it’s really on”

While it’s understandable that Cheeks would want to dedicate one love to fallen Lost Boyz member Freaky Tah, there had to be a better way than perverting an iconic hip-hop track. And speaking of originality, Cheeks crew of Bink! and Mr. Sexx license songs by Creative Source, Mary Jane Girls, and Eddie Kendricks all the way through “Hands High.” One won’t find me arguing that rappers should have to pay for re-interpreting old R&B songs into new hits (sampling is an art, not a crime) but the legal realities handed down ever since Gilbert O’Sullivan defeated Biz Markie in court are far different. As a result most hip-hop artists have been moving away from a reliance on vintage shit into creating ore original beats – except it seems for Cheeks. He goes on to Noel Pointer’s “Night Song” on “I Apologize,” borrow from the Four Tops “I Found the Spirit” on “The Wire,” jack Rose Royce’s “Car Wash” for the title track and even borrow from James Brown and Alexander O’Neal on the closing songs “Pimpalicious” and “Brighter.” How original is that? Forget the throwbacks on your skin, this album is throwbacks of your vinyl. If these aren’t in your crates, go ask your poppa.

On the other hand, it’s really hard to make a bad album using so many good beats, so Mr. Cheeks reliance on funk and soul classics is somewhat understandable (albiet nearly insane in clearance fees). And there’s no doubt that the album’s one original song, the lead single “Crush On You” featuring Mario Winans, is likely to be a big hit. It’s got that P. Diddy/ Fabolous crossover sound, a smoothed out guitar line and a drum track heavy on the clap and kick without a big bass beat. You might mistake this beat for something by B2K or Justin Timberlake, except for the raspy voiced Cheeks flowing over the track:

“Listen, last but not least, before I go
There’s something else that you should know
I’m your number one fan when I add you to my plans
I’m here when your plane lands
Delicate like a flower, I’ma love you with all my power
Think about you every minute of the hour
All I need is your number and a chance
Save me the last dance”

The upside of this album is that Cheeks truly dominates the delivery throughout, with only the guest appearances of Floetry, Pete & CL and M.O.P. being allowed to steal his shine, all on the first three tracks. Floetry does show up again to perform the chorus on “Let’s Get Wild,” which in this writer’s opinion would have been a better (if less radio friendly) choice for a lead single due to it’s bounce. As a complete package, “Back Again!” won’t dissapoint Mr. Cheeks fans – although he’s never had the cult following of other East coast MC’s like Jigga, Nas, Redman and Pharoahe Monch. Cheeks has a pleasant voice and flow, but doesn’t display enough cleverness lyrically to make his rhymes impress anyone. “The Wire” exemplifies his problem:

“Well throw my shit on, I stay with some new shit
15 bottles over here, that’s how we do shit
Clear the tables out, freaks get the freakin on
We do this shit all week and all weekend long”

In short, Cheeks lyricism borders on overly simplistic, and when he over-extends his reach he becomes redundant. Like Fabolous, Cheeks biggest problem isn’t his ability to flow or his breath control, it’s his ability to pen rhymes that are classics – and Cheeks doesn’t even have Fab’s ability to turn phrases like “du-du-du-du-DAMN” into hip-hop trademarks. “Back Again!” is a great album to listen to casually, but don’t expect anything groundbreaking or ORIGINAL when you listen to this CD.