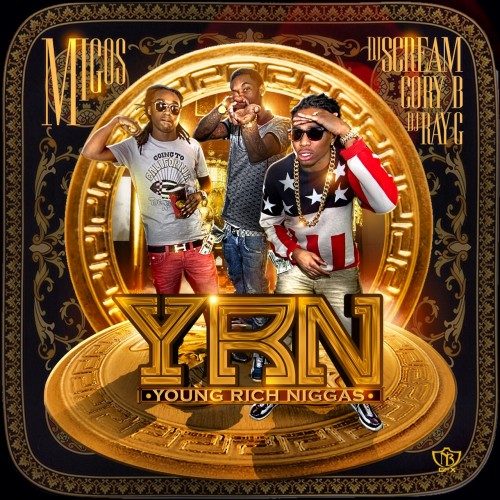 “Versace,” the breakout hit by Atlanta trio Migos, could easily be a parody song meant to make fun of how stupid rap has gotten in the twenty-teens. The hook is just the word “Versace” repeated eighteen times in a row, and lyrically it doesn’t get deeper than “shoes and shirt Versace/Your bitch want in my pockets/She ask me why my drawers silk/I told that bitch â€˜Versace’.” The video, which features the rappers hanging out in a mansion showing off their Versace clothes and jewelry with a bunch of finger-sucking models and a panther, wouldn’t need too much to be a Lonely Island bit. It was one of the stupidest songs of 2013. It was also a hit that earned the trio a remix with a verse by Drake.

I was so put off by “Versace” that I wrote off Migos and avoided listening to “YRN.” Then the mixtape ended up on a bunch of best of 2013 lists by people whose opinion I respect. I decided to give it another listen to see if there was some hidden genius in Migos that I was missing. After listening to “YRN” for a week straight, I think I understand the appeal.

One thing I have to say about the Migos right off the bat: when Quavo, Takeoff, and Offset aren’t just repeating the same word, chirping like a bird, or using white pop stars’ names as drug slang, they can actually kind of rap. In true Southern style, they rap in triple-time, dropping verses that are kept strictly to sex, drugs,  luxury brands, and occasionally giving shout-outs to dead homies (“R.I.P.”).  Their flow alternates between chanting and sing-songy, adding a catchiness to the songs that works well with the melodic production. They may not have much substance, but they have an excess of style. They aren’t going to give Earl Sweatshirt a challenge in the lyricism department, but they are a lot more fun to listen to.

The production is well-executed Southern trap rap. Gucci Maine collaborator Zaytoven produced six songs on the tape, including “Versace.” The rest of the tracks are handled by Migos’ childhood friend Juvie, Stack Boy Twuan, Phenom Da Don, Dun Deal, C4, Mercy, EA, and MPC Cartel. The beats are all mostly built around the synths, rolling hi-hats, and snap beats typical of Southern rap, but a little tweaked. The songs manage to hit hard but also be catchy, and the producers throw in trance and ambient influences on some of the songs. They know how effective minimalism can be, when to go all out and when to hold back.

How well you like the Migos depends on how much you can embrace their use of repetition. Most of the hooks on “YRN” are built around the group repeating the same word or phrase over and over again. It simultaneously drove me crazy and got in my head. I found myself cruising around chanting “Hannah Montana! Hannah Montana! Hannah Montana! I got molly, I got white, I got molly, I got white, and I been trapping trapping trapping trapping all damn night!” At their best, Migos are having so much fun that I forget just how the dumb what they’re saying is. Then after the third song in a row, Quavo’s unrelenting chanting becomes too much and I listen to something else.

Migos biggest issue might be that album-length mixtapes aren’t the best way to showcase their talent. They don’t have eighteen songs worth of material. They have maybe five songs worth of material, spread out over eighteen tracks. They are the musical equivalent of a fried Twinkie: totally devoid of nutritional value yet really satisfying in small doses. Taken in bites, “YRN” is a good time, but it is way more Migos than anyone should ingest in a single serving. I found myself alternating between hating it and loving it, then hating myself for loving it. That’s a lot of conflicting emotions for uncomplicated music.