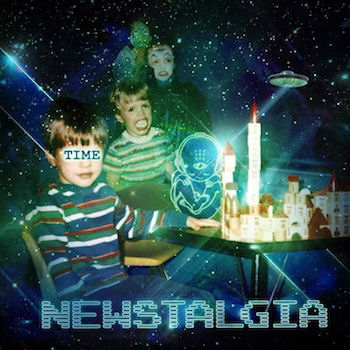 Time and Extra Kool just to name a few. If I were to offer an even-handed compliment, I’d say they remind me of my college radio days. Independent artists and labels would circumvent the traditional distribution outlets and send you material “for your consideration,” and while you never knew whether it would be good or bad, you always looked forward to ripping open the package and finding out what was inside.

“Newstalgia” is just such an album, from just such a label, and these days unzipping a digital file is the equivalent of ripping open an envelope. (At the rate postage increases we may all soon forget what opening an envelope is even like.) Time is the independent artist who works with other indie artists – like art rock band Xiu Xiu (“8 Bit Memories”), the avant garde rapper Ceschi Ramos (“Nona”) and London based singer Kit Richardson (“Swag Through the Gift Shop”) among others. It’s a very collaborative album for Time – not just different features on tracks but different producers behind them. In a heartbeat you can go from a Factor beat on “Black and Gold” to a Jake One banger on “Cardboard Gods.”

A reader might presume “Newstalgia” would be a disjointed culinary mishmash with this many cooks adding seasoning to the stew, but Time’s DIY sensibility provides the cohesion. He describes this release as “an autobiographical ride through video games, family, politics, history, and death” and is not just whistling Dixie with that claim. The title track and the Budo produced “Auto Bio” set the table for the hour + of music to come with a very personal beginning to Time’s life.

“When my mom was pregnant, she fell down the stairs
Doctor said abortion – he told her I was dead
But she waited through the night, and woke up felt me kicking
And in February she had an Aquarian infant”

And as the description promises, Time ends the album on his “Death Bed,” produced by Ephelant and featuring guest star Nonnahs. As fellow writer Matt Jost once said when talking about Time’s raps, “It’s quite a trip, but executed with a certain amount of expertise.” Absolutely correct. “Newstalgia” is Time’s most personal album to date, and as a result it may be difficult to find an entry point if you’re not previously familiar with his work. Some songs like “Love in the Time of Rap” featuring Chloe O could stand alone, but on the whole this is one of this albums you really need to experience start to finish.