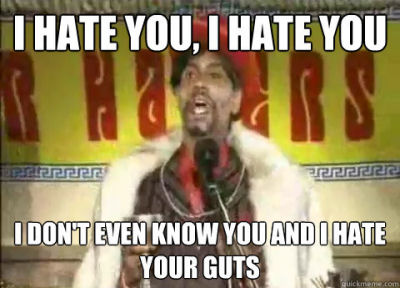 As Fans, We Are Failing Hip-Hop

Hip-hop is on the verge of eating itself alive.

I know those are strong words, but hear me out. Over the past few months I’ve noticed a growing trend when it comes to conversations about hip-hop, specifically on social media – the majority of hip-hop’s “fans” are only focusing on what they don’t like.

In a very hipster, contrarian, way, hip-hop heads feel like they can raise their nose in the air, and prove they’re smarter, or more hip-hop, than the next person, by tearing down something they know is popular, but that they weren’t going to listen to anyway. Not only does this serve no purpose, other than being a self-serving display of ego, it actually works to destroy hip-hop, because time that could be spent talking about an artist that person loves is instead being spent tearing down someone else creating hip-hop music (and please, let’s put away the “it’s not real hip-hop if it doesn’t fit in with an abstract concept of what I consider real hip-hop” arguments. Those arguments all boil down to “what I like is hip-hop, and I refuse to accept anything else”).

Blaming the fans seems like something only an angry artist who has lagging sales numbers would do, but the truth of the matter is we all have a voice, and most of us are using that voice poorly.

Last month, in hip-hop, we had the completely fabricated Grammy controversy regarding Macklemore taking home the award for best rap album. All of a sudden, an artist who’d worked for 14 years to blaze a trail for himself was being labeled a culture thief, and having his indie status called into question (the irony that hip-hop, which was originally a place for the outcasts, and the voice of the voiceless, would now try to make someone an outcast, and silence someone who worked so hard to get his voice heard, was apparently lost on everyone doing the name calling, and that’s really what it all amounted to, name calling).

This past week Nicki Minaj found her back in the news thanks to her new single, “Lookin Ass Nigga.” Not only did her Malcolm X cover art become a day-long topic of conversation (it was stupid, it was going to be changed, there was no need to make it a crusade), but her lyrics were also dissected by everyone with a Facebook, or Twitter, account. I even saw people, people I love and respect, taking the time to say they were refusing to listen to the song.

What does someone hope to accomplish when they take the time to say that? All it does is mention a song you don’t want to listen to, and quite frankly, it turns you into one of Nicki’s promotional pawns, as she’s managed to get you, someone who has no interest in her music, to talk about her.

When detractors decide to dedicate their time to talking about how much they don’t like an artist, what they’re really doing is pushing the artists they do like to the side, in effect dooming them to never being heard.

The next time you want to go on a hate filled rant, feel free to write it out, and get it out of your system, but before you click “post,” here are some ideas for what you can share instead, that will help hip-hop progress in a much more significant way.

* Take the topic you were originally going to rant about, and flip it into something positive. For example, “Everyone’s talking about Nicki Minaj. Here are a few women in hip-hop I prefer,” or “Macklemore winning the Grammy seems like a great reason to check out these dope hip-hop artists from Seattle you might have missed.”

* Post a video, or a song, of a current artist you like that you wish was getting more, or any, airplay. You don’t have to demean the artist you originally wrote your diatribe on, just share something you love, that’s current, to show people there’s great hip-hop being made right now that we might be unaware of.

* Post a link to the most recent album you purchased. In these times of free streaming, and so many artists embracing the iTunes singles based culture, actually purchasing an album shows an extreme dedication to an artist. If you tell everyone you put your hard earned money into an artist’s hand for something, it’s going to catch people’s attention, and spread the word.

* Post the flyer, or Facebook event listing, of your favorite artist’s next show. Seriously, they’ll appreciate it, A LOT.

Right now, as a fan base, we aren’t being progressive, we’re being whiners. It hurts to hear that, but it’s true. Let’s see if we can change our ways, and turn back into being progressive promoters of what we love, without feeling the need to tear down everything around us. Whether we like it or not, when we tear down an artist, we’re tearing down hip-hop, and that energy could be used to build something, something that is being ignored in our desire to be thought of as some sort of ultimate judge of hip-hop authenticity and greatness.