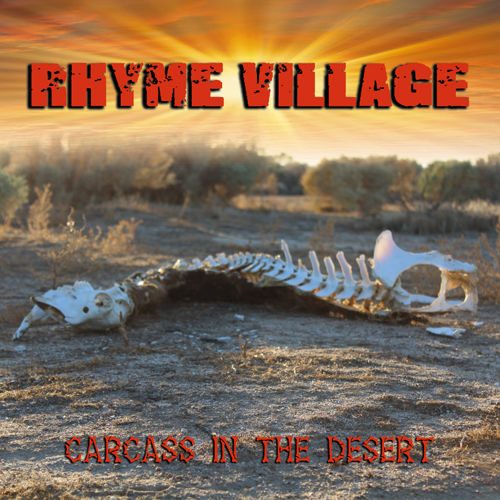 Rhyme Village :: Carcass in the Desert

Straight outta Lancaster! Crazy motherfucker named Cleen. From the gang called Rhyme Village, seen? Even though he’s from a city where he feels hip-hop isn’t taken seriously, Lancaster is one of the 30 biggest cities in Cali, which given the population makes it one of the 150 biggest in the U.S. It’s not surprising that under such highly urbanized circumstances he’d find a crew of like-minded emcees, band together for a common cause, and put out an album together. They are China White, Joe Sharp, Whut IAM, Sa’eed and Just Kauz respectively. Cleen did a promotional video for the album talking about life in Lancaster, including some of the surprising restrictions on freedom of speech there.

Individual credits are hard to find on “Carcass in the Desert,” but if their Cleen can rap as that’s been well established in previous reviews, and his distinctive nasal tone can be easily picked out on most tracks. Authentic b-boy sentiments can be found on tracks like “Revenge of the Synth”:

“You all about the culture? I’m sure
Most rappers never even windmilled before
Still found time to practice, breakin out rappin
Every time I’m in the spot I get that party crackin”

You could get the wrong idea that they’re a pistol packing posse from song titles like “Duck Hunt” and “Beautiful Day to Die,” but the only thing they strive to kill is competition on the mic. The songs with the best production, like the old school throwback “RV Radio,” and the smokers anthem “Hella High” can help them achieve those goals. My personal favorite is “Mind Frame,” which starts out with Cleen talking about people who are anything but, getting messed up to cope with the world. Weaker songs like “Up Early in the Morning” drag the album down – given the Ice Cube reference I expected far more. The everybody-all-in “Can’t Stop Us” could have been a great statement for the group, but at 6 minutes long the overly simplistic instrumental repeats a little too long. The biggest drawback here is that Cleen doesn’t seem to exercise the quality control he does on his solo albums, and since he’s the best rapper among them it seems like everybody else in this RV is just along for the ride.