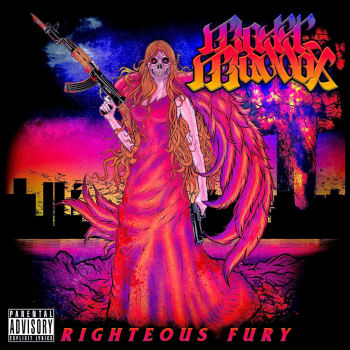 Hip hop’s underground has certain categories of artists that stick to that area of the genre, and milk a formula. Whether it be the emcees reliving the nineties with their throwback production (Doppelgangaz, Wyld Bunch, Dirt Platoon) or those adding a new twist on that gritty sound (Action Bronson, Roc Marciano), there is one part of hip hop that seems to have hit a dead end. I was a teenager during the time Jedi Mind Tricks starting carving out a cult following alongside artists such as Canibus and Ill Bill. This was at least ten years ago now, but what initially started as lyrical rappers tearing it up over boom bap productions, became more cinematic and epic in execution.

Stoupe the Enemy of Mankind has a lot to answer for, because now the underground is flooded with producers led by the orchestral sounds of the Snowgoons, churning out hollow, industrial and ultimately forgettable production. Matt Maddox is quintessentially a light-skinned Jus Allah, minus the memorable one-liners, and “Righteous Fury” is full of the cookie-cutter production you can expect to hear on any number of albums released recently with names like Vanderslice, C Lance and Sicknature involved.

It’s best to approach Matt Maddox with no previous experience (or overexposure) of that traditionally grim area of hip hop where everybody sports tattoos and beards. Songs like “Street Art” and “BARbarians” benefit from lighter production (they still bang hard, mind), but also see Matt delivering his rhymes without the â€˜frog in the throat’ technique he tends to lean towards through much of this album. It makes “King Killer” difficult to listen to unless your ears are well aligned with fellow lozenge-suckers Sean Strange or Vinnie Paz. It’s also devoid of anything lyrical to help make the vicious posturing digestible or at least interesting. And that is where “Righteous Fury” lets itself down, when it forces its underground position down your throat. “No Country For Old Men” is a disappointing track that does just that, choosing to put down popular artists such as Drake, Nicki Minaj and Wiz Khalifa, yet Engineer’s usually reliable production (see Diabolic and Rhyme Asylum’s work) drags this generic song in to unlistenable territory. As the first song, it’s not a great start and ultimately the majority of the record suffers from decidedly mediocre beats. The correct formula for Matt rears its head on too few an occasion; “El Mariachi” is a catchy beat that isn’t overbearing and sees Matt just spitting without overdoing the gruff masculinity he seems to be obsessed over. “Upon a Pale Horse” follows a similar theme but sees Matt clearly punching in and comes off as a bunch of bars on a beat, rather than a dope slice of hip hop.

“Righteous Fury” is aimed at the fans that eat up a certain type of hip hop. It’s got the heavy metal influenced artwork, the predictable features from Philly (Reef the Lost Cauze, King Magnetic) and when you beg the question, Matt Maddox doesn’t bring anything different to the table. “Work” is a crap attempt at a Vinnie Paz song, and while there are some tracks here that show Matt’s thoughts in a better light than the standard braggadocio, it’s all rather bland and forgettable.