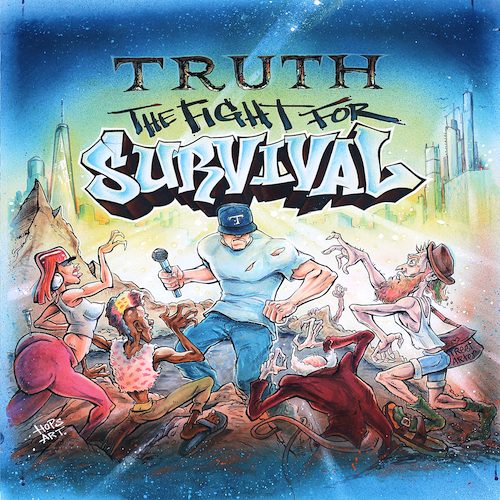 Truth - The Fight For Survival

Truth :: The Fight For Survival

“When the East is in the house – DANGER!!” Those were the words that first introduced us to deejay/producer/musician PF Cuttin’ in the mid-1990’s as he teamed with the rapper Outloud to form the rap group Blahzay Blahzay. While “Danger” was a hype ass track in frequent rotation at parties and on mixtapes, it proved to be a one hit wonder for the tandem. A follow-up album allegedly came out last year, but (1.) I haven’t heard it and (2.) Let’s note that it came TWENTY-TWO YEARS after their freshman release. I think with all due respect to Outloud it’s PF Cuttin’ who has gone on to make more noise in the music industry, as his services as a deejay and producer continue to be in demand to this day.

One of the publicists I receive regular (and welcome) updates from hit me up with Truth’s “The Fight For Survival” and described him as “PF Cuttin’s artist”. Furthermore he said the album was “executive produced by PF Cuttin’ and features work from Tragedy Khadafi, Royal Flush, Large Professor, The Beatminerz, Ill Bill, DJ JS-1 and DJ Doom”. I probably would have been intrigued just by the fact that PF Cuttin’ was shepherding a new artist into the music industry, but after that laundry list of credits there was almost no way I wouldn’t check out the album for myself. Animal Military Records got things off to a hot start a couple of weeks ago by putting out an “Extreme Measures” video featuring the aforementioned Tragedy and Flush.

Any boom bap lyrical track that scratches samples from Kool G Rap and Busta Rhymes into the hook stands a strong chance of winning me over unless the rhymes are garbage, the beat is whack as f–k and the turntable skills suck. Thankfully “Extreme Measures” is NONE of those things. Not only is it a certified banger it’s an OMINOUS one, having that lingering air of dank 1990’s Mobb Deep hip-hop. It’s dope but it’s also fair warning to their competitors that they’re NOT to be crossed.

“The Fight For Survival” comes in at a comfortable 50 minutes long, which in these days of glorified mixtapes and over-hyped EP releases is not to be overlooked. The influence of PF Cuttin’ can be felt throughout the album as his oversight makes Truth feel like a 1990’s East coast rapper who took a TARDIS to 2019, a feeling that’s only exaggerated by hearing him do a duet with Ill Bill for “Fly Off the Handle.” The turntablism is as much a feature of the track as the ill spitters on the beat, with samples of Canibus, Ol’ Dirty Bastard and Redman only heightening the old school feel. “Kill him like Big Pussy, throw his body off the boat” quips Bill. Did I mention that Truth isn’t f–cking around on this album? Neither are his guests.

One of my favorites from the LP is “Mic Like Boom” produced by JK1 The Supernova. Cuttin’ throws in samples from Method Man and Wu-Tang Clan off their debut album while Truth lays down his menacing vocal delivery. He’s unapologetic about his “f–k that mumble rap crap” attitude and seems like he’s on a one man mission to bring rap back to a bygone era.

“NYC is you wit me? Queens get the money
I might crack a smile, but ain’t a damn thing funny
Eye for an eye, it can ugly, turn bloody
Emotions aside, this is B-I, strictly for the hungry
They love me for being calm when pressed, I respond best
It’s New York’s uncrowned puttin it down like an armrest”

Other standout tracks include the bass laden “Toxic Temptress”, the heavy piano keys of “Front to Back Back to Front”, and scratches doubling as punchlines on the undeniable neck snapper “Arms Too Short to Box” (presumably with God). Truth doesn’t remind me of anybody else out right now, and that’s a huge mark in his favor, but the longer I listen to him there’s a little something I pick up on… he’s HARD, and that’s pretty much where his style starts and ends. Even NEMS stopped being hard long enough to pen a track like “Light One”, but Truth is as relentless as his name. The danger (no pun intended) of pursuing that style is that you can be outdone by those with an even more intense delivery (like Vinnie Paz) or a more loquacious lexicon (like Pharoahe Monch). It may come across like faint praise to say “there’s nothing bad about Truth” and that’s because he’s good… I’d even say he’s better than “better than average.” He’s working with the right people on and off the mic to succeed, but his bars are not the most memorable or quotable I’ve heard. It’s still a good album you should definitely check out if you miss that late 1990’s East coast flavor.