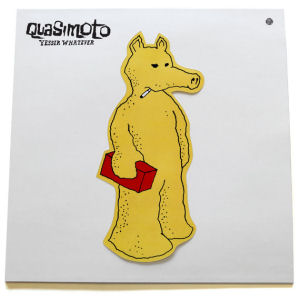 Quasimoto is an in-joke that not everybody who listens gets let in on. If you’re not familiar with the adventure of Lord Quas, I’ll give you a short explanation that will at least open the door to the bizarre – whether you step through afterward is your own choice. Quasimoto is the alter ego of rapper and producer Madlib, which is in turn the alter ego for Oxnard, California’s own Otis Jackson, Jr. Since Madlib tends to be better known for his production work with others or on his own, Quasimoto exists to indulge his occasional penchant for penning raps – just not necessarily in his own voice. Seemingly at random the vocals on a Quasimoto song will jump from his normal speaking voice to a helium-inflated counterpart, and at other times the higher pitched persona totally takes over with Madlib only offering occasional interjections to break up what is seemingly his partner-in-crime’s flow. In other words Madlib raps with himself on his Quasimoto albums.

If that seems crazy, deranged, possibly a little bit out to lunch, then you have reached the appropriate understanding of an album like “Yessir Whatever,” an album where Quas proudly brags that “We’ve been out there in orbit, and walked further than the moon – ain’t we?” on songs like “Astronaut.” Since Madlib’s skills as a producer are not much questioned these days – it’s pretty much a given he’s dope behind the boards – your enjoyment level is a direct reflection of your ability to deal with the self-indulgent flows of a man who admits he’s “a DJ first, a producer second and an emcee last.” Madlib lets Quasimoto behave badly, acting like he’s not responsible for the actions of his cartoonish alter ego, and the artwork reflects that as a porcine figure stands scowling at you with a brick in his hand and cigarette dangling loosely from his lips. The unsubtle message here is “I’m going to do whatever the hell I want, fuck you if you don’t like it.” Thankfully I do, but it could be I was meant to given I recognized “Broad Factor” as a parody of Mad Skillz right from the jump.

“I know you’re tired of dumb shit, so check this here
I see the neck breakin, butt shakin freaks of this year
Yeah! So peep the steelo of how it go
Your neck turnin cause your head already know
So pass that — and watch Quas dip fast
And have honies back in the Jeep catchin whiplash
In fact, it’s so fat, have you all on smile
Take my dick most y’all do things to make you raise your eyebrows
I’m comin/cummin soon, y’all about to get it”

“Yessir Whatever” collects twelve songs from a twelve year span that never got a proper release before now, although a few of these joints came out on vinyl singles and B-sides here and there. Song titles like “Am I Confused” are perhaps more appropriately self-explanatory than even Madlib intended, as he jumps through several different vocal pitches over a plucky Asian-influenced beat puncuated on the chorus with Organized Konfusion samples. More than anything else, it’s the production and the samples that hold things together. I don’t mean to insult Madlib with this statement, but “Seasons Change” would be a perfectly enjoyable song without any rap whatsoever – in fact it would be much like a MF instrumental. On the other hand he sticks mostly to his own voice on “The Front,” and his laconic flow is enjoyable. “Brothers Can’t See Me” mixes together several different familiar hip-hop beats and breaks from back in the day, while Mad-Quas gripes “I be paying good money to hear some whack shit.” I can relate.

The album has more laughs than groans, and does make some good points at times with songs like “Green Power” even if it does so with the higher vocal tones of Otis’ alter ego’s alter ego. Perhaps Quas sums it up best on “Planned Attack” with the words “Comin’ through like Thelonious Monk – Madlib drop harmonious funk.” And at the end of the day “Yessir Whatever” works because of that – no matter how dead bent Madlib’s sidekick Lord Quas, the harmonious funk of the music holds this album together. The funny thing is that it doesn’t sound like it was recorded over 12 years – more like 12 months. That may be the biggest advantage Madlib has to his Lord Quas persona – when you can become a cartoon character your style transcends time limitations.