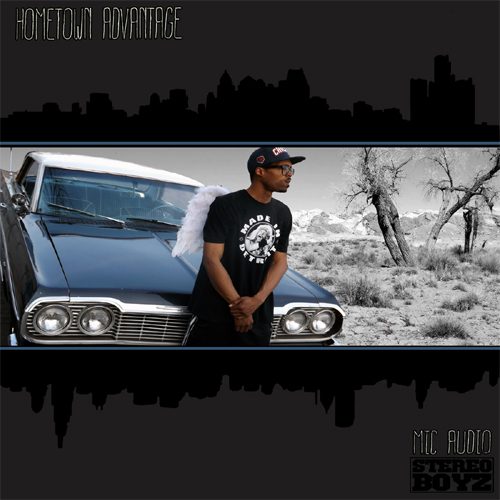 It’s time for another Stereo Boyz affiliated project to grace the digital pages of RapReviews. This time the largely Detroit-based collective has decided to forge a Midwest alliance and drop an EP with Chicago producer Matcy P. For Mic Audio this collaboration is a “full circle” deal given that he describes himself as “Chicago bred,” so even though he calls the D home now he clearly feels some loyalty to the Windy City. That’s not surprising – I’m not even born there and consider it one of my favorite places on Earth. Chicago’s not without its share of problems, but then again neither is Detroit, so heads can relate. They may be rivals when the Bulls play the Pistons or the Lions play the Bears, but when it comes to hard times and passionate emcees, it’s not hard to relate from here to there.

Actually it’s a bit of a misnomer to call “Hometown Advantage” a Mic Audio & Matcy P album, because as the above track featuring Mixo and John Wize illustrates, there are a lot of guest appearances on this short 27 minute release. The whistling “Keeng Cobra” features Kid Boombox, DJ Los scratches on the symphonic boom bap track (appropriately named) “Hands,” and “Blood Lines” wouldn’t be complete without the addition of Vinnie Bass. One thing that stays consistent despite the changing line-up is the audio production – smooth melodically and well EQ’d with the vocals. The experience of the respective talents of Audio and P is evident throughout the EP.

At times I’ve been a bit blase on the Stereo Boyz due to overly long albums that seemed uneven throughout – a quantity that exceeded their quality. It’s not as though I can credit them for taking my criticism to heart, but “Hometown Advantage” feels like a response in that it’s a shorter and more concise experience. That’s not to say the songs are short – all but one clocks in over 3:30 – but to say that Audio and P limited the selection on this release to their best work. If they recorded 15-20 songs, these were the 7 good enough to move on, and I thank them for making that winnowing choice. You will too.