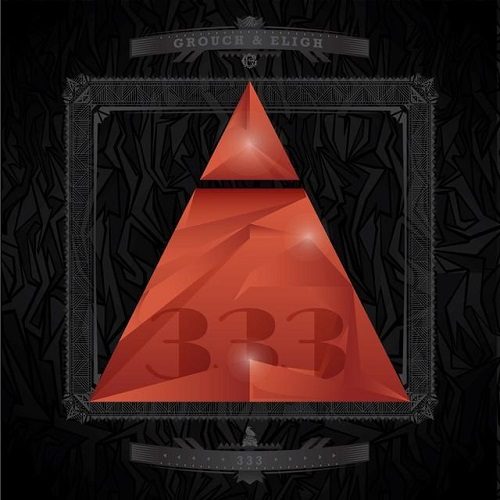 I don’t often feel the need to start a write-up with a “reviewer’s copy disclaimer” (in fact almost never) but when I do I prefer Dos Equis. Wait, what? Sorry about that. This is our first Grouch & Eligh group review since 2009, so it’s a monumental moment, and it would be even MORE monumental if I tried to review all THREE. That’s for the reason for this unusual disclaimer and opening paragraph – the review copy I received for this write-up is 14 songs and 55 minutes long. If you buy the album off Amazon.com

you’re getting over 2.5 hours of music. It seems unfair to only charge $11.49 for that, but it would be equally unfair of me to not give full disclosure and say I don’t HAVE all of that. I can only review the selection that the label sent me, so for what it’s worth, here’s the tracklisting of the abbreviated version.

In case you’re wondering the guest on track 13 is from the jam band Slightly Stoopid. If you weren’t wondering, then we should just move on. You should however recognize names like Kreayshawn, and while she’s had her share of critics, if you know anything about The Grouch or Eligh it’s that they proudly do the unconventional. They’re likeminded Living Legends (Eligh still active, Grouch on hiatus) from the Los Angeles rap scene. I’ve always found them interesting alone, but as a duo they do (oh) bring the best out of each other. It’s perhaps appropriate that according to the press release, it’s one group album and two solo joints comprising the triple threat, which means that the “333” they sent me is what I’d like the most. “ANX” strikes me as an ideal example in its soft strummed melody and in your face lyrics:

Grouch: “We don’t come into this world knowing all, growing backwards
If we never face struggle in the bubble well that’s a curse
My nerves stirred worse
Drinkin num num juice to quench thirst
What they call it liquid courage for?
When after in it’s over you’re weaker than before
Your power gotta reach you at the source
Build it up like blocks little boys…”

I have the feeling newcomers will gravitate toward “Run” featuring Pigeon John first though. It’s an easier entry point thanks to the sing-along chorus, the familiar Run-D.M.C. sample, and a laid back groove that seems to reflect their Cali heritage – at least until Eligh starts spitting 10,000 MPH rhymes.

Speaking of newcomers, how do you describe Eligh and Grouch if you’ve never heard them before, and didn’t click play above? Well the song “Say Eligh! Say Grouch!” actually covers that, but it comes two-thirds of the way through. I’d have actually opened the album with it instead of “Introcentric.” It won’t take you long to get down who is who though – Grouch is the intellectual and the inquisitor, his vocal tone seemingly always begging for a response. Eligh is the self confessed “Grey Crow,” a little bit monotone and melancholy, but holding hidden depths that come through in his passionately quick raps. They’re not just partners in rap though – they’re real life friends who go on real life journeys together – such as this skydiving trip set to the strains of one of the album’s best songs (“Ashes to Ashes”).

There’s an inherent playfulness and fun to when Grouch & Eligh work together, which befits “The Tortoise & The Crow,” an album which in itself sounds like one of Aesop’s fables. The narrator who pops up periodically at the start or end of songs reinforces that structure. If you doubt the bond though and think it’s just for marketing purposes, just listen to Grouch breaking down self-love and group love on “Akfam”:

“Some call you selfish cause you want to love yourself
Well that’s rubbish – so I love myself
And I love my brother, and I’d die to tell it
I got a load to get off, so I’m riding with it
None of these tickets is wolf, I got proof
We walked in these shoes and talked in these tones
An optimist – you knocking these songs?
I opened my doors, they tossin these stones
Well let me draw something, like my daughter does
Higher thoughts than you thought, what you thought it was?
Throw it back as a blessing, demonstration of
my love it’s honest, no limitation to it”

That one moment alone is a 10 out of 10 for raw honesty and beauty of Grouch’s sentiments, which at this moment make him seem like the most inaccurately named rapper of all time. Like their other collaborations, “The Tortoise and the Crow” resonates because of their view of hip-hop as an artform they can paint with words, then hang in the gallery of your headphones to appreciate. There’s a purity to the work that doesn’t pervade the popular songs of today about getting money and fucking bitches – because if they weren’t making any or getting any they’d still make songs just like this. I could only give this the highest marks possible if I had received and/or listened to all three discs, but what’s in this one disc alone makes the other two worth owning.

The Grouch + Eligh :: The Tortoise and the Crow: 333
9Overall Score
Music9
Lyrics9