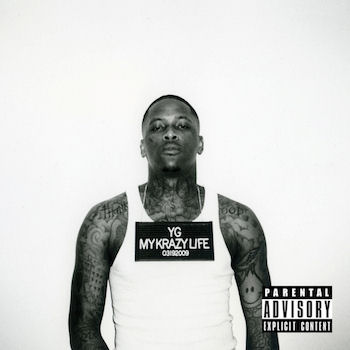 The secret of a good album is to have a good beginning and a good ending; and to have the two as close together as possible. Of course, George Burns may have been talking about sermons, but it applies to hip hop LP’s too. Fortunately, YG has applied this to his debut “My Krazy Life” and thanks to superb production from DJ Mustard, savage editing from Young Jeezy (who acts as the Executive Producer) and an unerring sense of funâ€¦ Well, what could have been the most clichÃ©d debut in history ends up being quite irresistible.

This is West Coast hip hop boiled down and reduced to the most essential elements, and almost everything else is ruthlessly cast aside. “My Krazy Life” ends up being just over forty-six minutes long, with very little filler and possessing a wide variety of concepts. You may note that I didn’t use the phrase “subject matter” – this is essentially hip hop karaoke with a twist. Various classic tracks are lifted left, right and centre (Snoop, Dre, Biggie and Pac are the main targets) but fortunately a light touch is applied, both musically and lyrically. Those three-quarters of an hour simply fly by, with the sonic journey almost dead on perfect – DJ Mustard deploys that familiar goofy style of his that works in the right situations, with tangy bass skipping over sparse handclaps. It’s instantly familiar thanks to “Rack City” and his other joints, but it simultaneously pays subtle homage to “The Chronic” and “Doggystyle”. Truth be told, he deserves to share credit with the star of the show.

YG himself is clearly a work-in-progress, but one who possesses an inexplicable charm. He frequently says nothing of note, constantly quotes legends and is limited technically. We lambast J. Cole and Tyga for precisely the same things, but somehow YG pulls it off on his own album. Perhaps his style won’t transfer as well to other projects, but in his own world it’s a great start. “My Nigga” has been one of those inescapable street anthems that ends up soundtracking Vines and shit – and “Who Do You Love?” featuring Drake is more serious fun for the clubs. Those are the obvious singles to hook you in, but there are plenty of cleverly crafted joints sprinkled throughout. “Really Be (Smokin N Drinkin)” features another solid guest verse from Kendrick Lamar, but he doesn’t run off with the track as per usual – YG has bags of character, enough to own his own shit.

While “Me & My Bitch” and “Sorry Momma” are clear descendants of Biggie and Pac, and the slightly cloying “Do It To Ya” (standard ladeez track) doesn’t necessarily earn its place, the rest of the LP is pretty bulletproof. Songs like “Meet the Flockers” and “Bicken Back Being Bool” have an addictive quality, not to mention a sense of real individuality. “I Just Wanna Party” is a straight banger, with the best kind of ignorant chorus; “Left, Right” recalls a TM101 Young Jeezy (which makes sense, considering who the Executive Producer is).

“My Krazy Life” is a successful debut album that achieves most of what it sets out to achieve. The bizarre by-product is the presence of an intangible magic that sets it apart from more predictable offerings (from the likes of Rick Ross and co). That might just be the irrepressible nature of youth, but it’s also down to a wise old head overseeing it all, and a hot young producer/DJ who has kept his ear to the street. One can’t reasonably foresee how well “My Krazy Life” will age, but it’s definitely worth your time and money right now – it will raise a few smiles, break a few necks and should be listened to loudly in residential areas. It also acts as further confirmation that the West Coast isn’t just back – it never left.