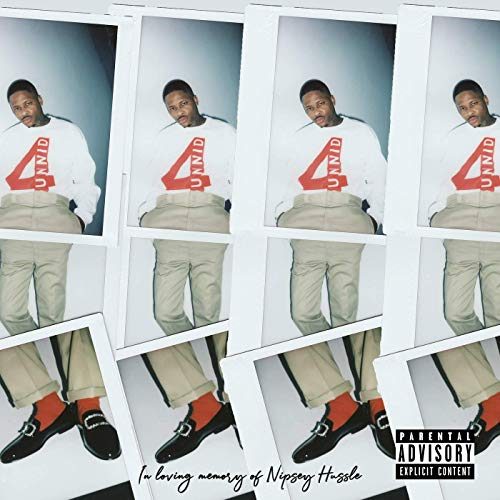 YG’s star has been on the rise ever since his breakout 2014 album “My Krazy Life” but as Patrick Taylor noted in 2016 it hasn’t been a smooth and steady ascent. Both before and AFTER he became a national rap star Keenon Jackson was catching bullets, which if we’re all being honest is a very unfortunate euphemism that downplays how serious it really is. You don’t stick out a catcher’s mitt and catch the bullets like a 90 mph fastball, which in itself is a dangerous profession (they wear those cages over their faces for a reason). You ain’t catching S**T when bullets rip through your flesh. There’s an entrance hole, an exit wound, and it’s a matter of circumstance and chance whether or not it destroys a vital organ on the way through.

I bring all of this up because the cover of YG’s “4Real 4Real” declares the album to be “in loving memory of Nipsey Hussle.” His death at the end of March would in ideal circumstances have been a wake-up call about the unrelenting cycle of violence across America, but sadly it just ends up being another body in the morgue and another family grieving. If it weren’t so ordinary for black men, women and babies to die every day there never would have been a need to say #BlackLivesMatter. The tragedy is that nothing seems to change no matter how loudly people say it. Cops still shoot unarmed teenagers in the back. Gang members recklessly spray bullets at their rivals. Minor beefs in clubs quickly escalate into exchanges of gunfire. While we continue to debate the 2nd Amendment’s meaning and intent more people of all colors die in a hail of bullets, but disproportionate numbers of black people in the U.S. are the victims.

Nipsey Hussle’s “Last Time That I Checc’d” was one of those rare moments that could have broken the cycle. Despite the fact they hailed from historically opposed sets, YG and Nipsey Hussle exchanged colors and respects in a song and music video that showed them literally crossing over into each other’s world. The entire song was an ode to independent success and being major without a major. While YG lives that with his own 4Hunnid imprint, he also has distribution through Def Jam/Universal, so at least some piece of the pie is still getting split with corporate. At this point YG is undoubtedly large enough to share it and still eat well off his own slice, but other artists may not be as lucky if they end up in the same spot. Either way “4Real 4Real” is a heartfelt album that shows YG is thinking more and more about the message he puts out and how it is received. That won’t stop the imagery of “Stop Snitchin” from disturbing some viewers.

Historically speaking it follows in the precedent set by earlier videos like Public Enemy’s “Cant Truss It”, but parents may want to sit down with their kids and watch it together to discuss the context. Either way there’s a historical meaning to snitching that certainly suits the visuals, as a so-called “house n***a” could do real damage to vulnerable and powerless slaves by telling on their plans and causing punishment (or death) at the hands of the slave masters. The song itself seems to be speaking more about “snitching” in the modern sense though of “don’t tell other people about my criminal activities ESPECIALLY the police.” Censoring the verse that explains this would ruin its impact so be advised that what follows is explicit.

“I can smell a bitch nigga a mile away
Type of nigga so bitch, he should put ‘bitch-made’ on his license plate
From that real shit, you bitch niggaz play hide and seek (bitch-ass niggaz)
Me and bitch niggaz, we don’t conversate
Bitch niggaz love saying real niggaz tryna hate (bitch-ass nigga)
But nah nigga, I’m a real nigga, I had a bag of weight
You got fear in your heart so you cooperate (bitch)
I can’t stand how bitch niggaz operate”

It’s only fair to note the context changes the meaning of the song. YG’s talking about the code of the streets, not slavery, but that doesn’t stop the video from being a highly artistic vision to accompany the song. As I said before YG’s clearly evolving as an artist and songs like the Swish produced “Keshia Had a Baby” reflect that evolution as a narrator and orator.

YG is moving beyond just representing the code of the streets or his own turf into broader social commentary in his songs. The protagonist of the song is clearly not the baller Chris, it’s his girl Keshia who he treats as little more than an accessory on his arm, who he’s happy to cheat on once he’s got money and fame to spare despite the fact they have a child together. Unfortunately this is another of those tragedies that is so common it is often overlooked and ignored, especially given it often escalates into domestic violence and restraining orders. It shouldn’t be so mundane we ignore it but YG’s going to take the time to look at it here. The Cronkite produced “Her Story” features Day Sulan and follows in its footsteps.

I don’t want to oversell this as though YG is suddenly woke and has become this generation’s Common Sense or Chuck D. The rowdy DJ Mustard and Cubeatz produced “Bottle Service” is unapologetically about balling, drinking and living the good life. “No I’m not a water boy, nigga I’m in the game” quips YG while spitting game at his haters and the broke men and women who envy the success he achieved.

If you like big booming beats “4Real 4Real” has plenty. From the Mustard laced trunk rattler “In the Dark” and “I Was On the Block” featuring Boogie and Valee, to the future single “Do Yo Dance” with everybody from RJ to Ty Dolla $ign and 1-O.A.K. on the beat, to Corbett injecting flavor into bars by G-Eazy and YG on “Do Not Disturb” the music is hotter than salsa. Coincidentally “Go Loko” featuring Jon Z and Tyga should be making noise on your local urban radio station by the time you read this thanks to another spicy Mustard track.

It’s hard to know where YG goes from here. He reportedly delayed this album’s release because he was shook up by his friend Nipsey’s death and rightfully so. I’m hoping that motivates him to create a legacy not just for the young rappers who will inevitably follow and/or imitate him but for a youth starving for leadership figures who will show them you can make it without having to sell your soul. He could easily coast on his fame and success from this point out, especially if this latest album performs well, but I’d like to think YG recognizes the opportunity he has to make a difference. Then again that may just be the perception of one writer who is tired of our collective indifference to the deaths of young black men like Ermias Asghedom. Either way it’s another solid album from an artist who like his late friend can crossover into a lot of areas (and arenas) given the chance.