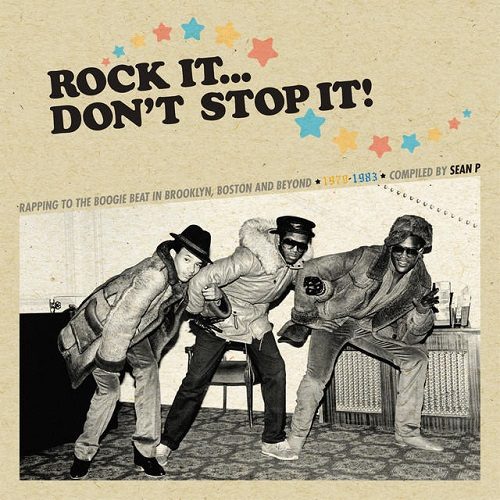 It’s a common experience for rap music enthusiasts – just when you thought you heard it all, along comes something new. Only that that ‘something new’ doesn’t necessarily have to be new. There exists a canon of some of the earliest recorded hip-hop tunes that has ostensibly influenced the subsequent evolution of the music particularly during the 1980s. And then there are the obscure one-off recordings from unknown artists on small specialty record labels that didn’t get the spins of “Planet Rock” and didn’t sell the numbers of “Rapper’s Delight.” BBE Records has called on London-based, longtime expert Sean P to unearth and clean up such hidden treasures for the 10-track compilation “Rock It… Don’t Stop It!” One item, “Rappin’ Partee Groove,” was just recently recognized by this publication via our review of “West Coast Rap: The First Dynasty,” and while the Rappers Rapp Group were undoubtedly L.A. rap pioneers, “Rock It…” focuses on New York City and New York State (with one notable stop in Boston).

If you’ve ever delved into the wealth of interviews conducted by Troy L. Smith and JayQuan or read ‘Yes Yes Y’all – Oral History of Hip-Hop’s First Decade,’ you know how difficult it is to keep track of everyone’s movements in the early scene. Even harder to come by is correct information on people who weren’t key figures. And yet sometimes just listening to such records can provide you with useful pointers. I picked up two specific names during “Rock It…,” and both times further research led me to the hip-hop personality the name reminded me of. The one whose identity is positively confirmed is beatboxer extraordinare Rahzel, who thanks to his stint with Philadelphia’s The Roots was able to record a couple of well received solo albums at the turn of the millennium. Originally from Queens, he can be heard (rapping, not beatboxing) as one of Rickey G.’s Everloving Five on 1983’s “To the Max,” a funked out (and well organized) serenade to the ladies whose five casanovas find out they pretty much all fell for the same girl.

As for the second name, there’s no definite proof but there is a good chance that the DJ Mark mentioned on “MC Rock” is veteran beatmaker 45 King, who started out as a record boy for DJ Breakout and at that point would have been the DJ of the Jazzy 4 MC’s, who put out “MC Rock” in 1979 – but not Jazzy Jay’s Jazzy 4 MC’s that were a variation of the original Jazzy 5 MC’s that had existed since the mid-’70s. To add to the confusion, the quartet included a namesake of the Force MC’s’ Mercury (who admittedly didn’t appear on the scene until some years later) and a female rapper who calls herself Fly Scha-Rock, who specifies that she’s “not Sha-Rock of Breakout,” the b-girl legend and female in the Funky 4 Plus 1. She also lets us know that she plays college ball for St. John’s University, which would make her – remember “Sucker MC’s” – a (slightly senior) schoolfellow of Darryl ‘D.M.C.’ McDaniels. Off the court she was part of a vocally diverse rap crew and “MC Rock” has more in common with the classics than some of the other tracks here – or maybe it’s just the (faint) “Got to Be Real” groove that makes it more familiar.

An important point of distinction in old school rap have always been the vocal styles. There were those who patterned their performances after popular radio DJ’s (who can claim a strong influence on rapping), there were those who were masters of ceremony in the very sense of the term, intent on getting the party going, and there were those who advanced the technique of rapping into something of its own. 1981’s “The Golden Rule” by Cat Claw and the Better Love Crew, presumably one of the earliest hip-hop records out of Brooklyn, has a message (“Just go to school, do the right thing,” he begins), but it’s obvious that Cat Claw hasn’t given the technicalities of this rhythmic talking all that much thought.

The same year Brooklyn-born, Queens-based Mr. Sweety “G” released “At the Place to Be,” which, once it finally gets in gear, boasts a tight-knit studio groove. Not to be mistaken for Sweet G of “Games People Play” fame, Sweety “G” may or may not, as he claims, have “played all over the world / from Africa, Europe, Italy and all the rest,” but he was certainly a local factor, as a rare interview with OldSchoolHipHop.com indicates. He’s quite a natural on the mic, so that in terms of crowd-pleasing skills “At the Place to Be” corroborates his recollections.

Still decidedly more impressive is the piece left behind by Terry Lewis and Wild Flower, 1983’s “The People’s Message, Take Two.” This is an in several ways astounding find. To get the next potential case of mistaken identity out of the way, this is not the famous R&B producer Terry Lewis, but a male MC who partners up with a young lady named Wild Flower. More noteworthy than the fact that she also sings on the track or that it is a mixed rap duet are their specific performances. Early rap, at least when recorded, had a tendency to be overplayed and stiff, and it took the new school to take things down a notch and simultaneously add a myriad of different nuances.

Terry Lewis and Wild Flower, although still relying on the type of intonation used by the innovators, both flex surprisingly unrestricted flows that, if projected into the future, would be akin to the form of rapping practiced by the Native Tongues. Bridging the gap between old school and D.A.I.S.Y. Age (so to speak), they use their clear and unaffected deliveries to deliver a message ostensibly inspired by Melle and Duke’s “The Message.” Mr. Lewis’ extended social commentary is noteworthy in its own right, from exceptionally early multi-syllable rhymes (“To win my liberty, to ring my bell / cause all you been givin’ me is nothing but hell”) to one of rap’s first references to awareness of African history (“Never teaching us about the true things / Like when we were home we used to be kings / You know I want my children to grow up smart / They need a good education right from the start”), but Wild Flower’s portrayal of a woman raising the kids by herself while the father is in jail is absolutely unique when you consider the year of recording. To top it off, the 13-minute-long “The People’s Message, Take Two” ends with nearly 3 minutes of a Martin Luther King recording (set atop the rich, thick percussion) that the internet only recently has reported to be ‘newly discovered.’

There are indeed many things to be ‘newly discovered’ by a generation who ignores that plenty of stories, sights and sounds exist without online mention. Thanks to BBE and Sean P we can educate ourselves about rap music that was once found on vinyl exclusively and learn, for instance, that people have come to the realization that “you only live once” before, when we encounter the phrase on two different tracks on “Rock It… Don’t Stop It!” You might have different expectations from an act called Hardkore and a track called “Boom,” but it’ll give you a taste of the freaky as well as geeky manifestations of recorded hip-hop in its infant stages.

Catch Tricky Tee (not to be confused with the mid-’80s BX MC of “Johnny the Fox” fame) and Rickey Rock AKA the Sinister Two offering rap lessons to presidential candidate Ronald Reagan to solve the ongoing hostage crisis in Teheran (“Put a microphone in his hand, we’ll teach him how to emcee, and when to say yes and no / and how to tell the people in Iran that you let our people go”) on their “Planet Rock”-referencing “Rock It, Don’t Stop It.” Or be witness to how The Jackson Two, two teen sisters, manage to be more explicit than any other MC here with 1980’s “Oh, Yeah,” Shorty B promising to “fill your head / with some more of my rhymes until you drop dead” and demanding “champagne, Cadillacs, and a lot of money / I said these are the things that you got to have if you want my honey.” Meanwhile Charlie Choch (spelling unconfirmed), next to boasting, “I put the moon in outer space / I took the mask off Batman’s face” and to have “more rhymes than a pimp got women” and quoting military cadences (where she just omits the word “pussy”), shows herself to be alarmingly familiar with drug matters:

Kevin Fleetwood and the Cadillacs of Sound had a different agenda, at least on 1983’s “Sweat (The B-Side),” (a variation of the A-side “Sweat it Off,” which contains a distracting, disco-ish break of female ecstasy). As in the case of Rickey G., it’s not clear who Kevin Fleetwood was and why his support’s name sounded like a doo-wop quartet, but the four MC’s featured, Mark K., L7 (“the funkiest square sent from heaven”), Grandmaster C and Therez, all possess personality in spades and next to making you dance bring a realism to the mic that would become characteristic for rap music made in Boston:

“The music comes from the heart of Bosstown
Roxbury, yeah, a ghetto town
But to live in the ghetto you gotta be rough
Cause the streets are hard, the city is tough
Your pockets are bare, refrigerator’s empty
You don’t know the taste of meat
You got telephone bills, rent’s overdue
They wanna put you out in the street
You got one, two, maybe three or four
little itty-bitty mouths to feed
They already have every damn cent you got
I said, we are the ones in need
The only thing that you have today
that you really can say is yours
is the rhythm-rock-rap, the body-rock-beat
and the funk that really rocks the floor
So if you see a chance to break, you better grab on
You won’t get a second chance, might not live that long
So sisters and brothers, out in the street
Make that pay – but be unique
And don’t let the man tell you what to do
Only answer to one – and that one is you
Yeah, I’m out here tryina hustle a deal
I’m gonna do the best I can without havin’ to steal
I’m gonna live my life by just bein’ me
And part of my life is bein’ a damn good MC
But it’s hard bein’ known when you’re from Bosstown
Cause people don’t think we know how to throw down”

And that’s virtually the theme of this compilation as the odds proved to be against these artists, at least at the time of release of their recordings. While “Rock It… Don’t Stop It!” has its revealing and amusing moments, it is a compilation of musical footnotes for hip-hop and disco nerds. It’s safe to say that if these would have been the leading recording artists of the rap genre, it wouldn’t have gone that far. Rap needed the Melle Mels, the Kool Moe Dees, the Kurtis Blows, to inspire the Runs, the D.M.C.’s, the L.L. Cool J’s, the Slick Ricks, and so forth. Neither is there totally experimental and/or original material like “The Message,” “Planet Rock” or “Beat Bop” to be found. This is simply solid, entertaining music from also-ran rappers rocking to the rhythm that just don’t stop.