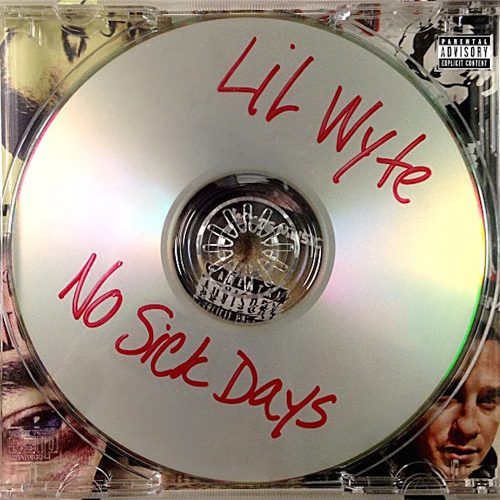 The CD sitting on the desk next to me looks just like the one to your right with one exception – it’s autographed “Much Love – Lil Wyte” on the blank spaces to the left and right of the CD’s spindle hole. It’s fair to say that Wyte appreciates our coverage, since including “No Sick Days” we’ve reviewed four of his albums dating back to 2007. Well it’s all good Wyte, thanks for the signed copy, but we’re just doing our job so we’d cover your albums regardless. If anything it makes me slightly uncomfortable when rappers give you autographed shirts, posters or hats in a press kit. It’s not that I don’t appreciate the gesture, but it makes me feel the bar has been set at a new level. If you are overly critical in a review you offend someone who has been friendly to you, and if you are under-critical then you do a disservice to your readers. If you don’t get the swag then you never have to think about it.

I must admit that I’m relieved to find out “No Sick Days” is almost exactly what I expect from Wyte. In fact I can in fairness say the following without being either unfair or offensive – Wyte doesn’t really change that much at all from album to album. If you take that as a positive, that means Wyte continues to give his loyal audience exactly what they demand. If you take that as a negative, that means Wyte doesn’t evolve as an artist – he is now what he’s always going to be. The spin you take is entirely based on your own perception regardless of anything else I’m going to say in the review.

If anything does feel different as the years go by it’s that Wyte and his Three 6 Mafia amigos collaborate less frequently. The connections are still there though on this album they are tenuous – not strained or forced but requiring a little scrutiny to see. DJ Paul produces the opening “F@#! a Intro,” but that’s only nine seconds long and has no music to it. Mafia affiliated rapstress La Chat has a featured appearance on “Run Up” as does Frayser Boy on “M.O.E.,” but if you need a lyrical appearance by Paul, Juicy J to feel complete there’s a piece of the puzzle missing. Since Wyte appeared on Da Mafia’s song “Remember” though it should prove that the two sides are 100% solid, and Wyte’s ode to them on “Mighty Mafia” proves his loyalty is as unwavering as ever.

T-Stoner produces this track, and seems to have Wyte’s ear throughout the album, providing some of the album’s hardest songs. There’s an unstated word at the beginning of the twelfth track “On These Rappers” but if you check out the official video it’s not hard to discern what it is.

If you like getting turnt up way past 10 then “House Party” will be your joint. If you like the heavy swang and rang with spooky overtones the aptly named Austin Chillz laces “SJGR” nicely. If you want a symphonic song and personal story from Wyte then “Soon You’ll Understand” is your joint; speaking of joints, if you just want to toke up then “It’s 4:20” will be your anthem. It also happens to be the day this album was released. In conclusion I’d like Mr. Patrick Lanshaw to know that “No Sick Days” is a satisfying album – neither overwhelming nor underwhelming. Supporters won’t be disappointed, and newcomers might be drawn in by the crunkness of tracks like TTM Beats’ “Three High.” The most important thing though is that Wyte does what he does exactly the way his supporters would want him to do it.