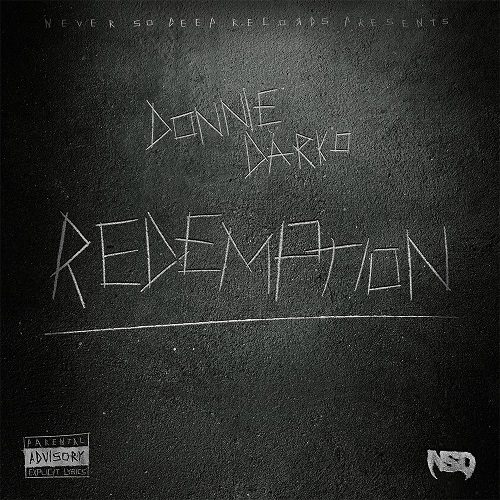 Longevity in underground rap is a rare thing indeed. If a label’s recording history goes back 10 years and more plus involves largely the same names, at least some right decisions must have been made in regards to business model and artistic vision. Never So Deep Records, producer DJ Bless and rapper Donnie Darko is a combination that has happened before, “Redemption” being their latest effort.

That there were others before can be gleaned from the fact that 7 tracks on “Redemption” are actually 2nd or 3rd parts of previous songs, a method of songwriting that can leave newcomers to Donnie Darko (like myself) feel excluded. Single “One False Move Pt. 2” apparently references the rapper’s very first appearance on a 2005 Never So Deep release. DJ Bless provides him with a beat that sits squarely between dark, hard and melodic, an appropriate backdrop for the unflinching hood impressions:

“Cold nights on that project bench
Crack of dawn but you can smell that stench
It’s the ghetto
Cops out tryina dust for prints
Drive-by’s cause them windows tint’
They blast metal
Crack sales, dopefiends, broke dreams, coke schemes
Muthafuckas’ll kill you from your home team
[…]
No fucks given
Buckshots really leave a fuckin’ leg missin’
Let’s see how you walk away
I grab a clip, move a brick
fuck a bitch, kill a snitch, drink a fifth of Hennessy
– in one fuckin’ day”

The most remarkable thing about Donnie Darko the rapper is that he sticks to the late ’90s/early ’00s template of hard life told from a heroic perspective. This is the kind of do-or-die, serious-as-a-heart-attack rap that even the leaders of the new school of hard knocks like Torae or Slaine have since toned down. To continue the comparisons, with an intonation, vocal tone and breath control not unlike Papoose’s and particularly Reef the Lost Cauze’s, Darko lacks that emceeing edge that the latter two, despite their uncertain position in rap’s all-time ranking, nevertheless exhibit.

That leaves a fairly generic performance that passes due to pure functionality. The Newark native wisely opens the album with the cautionary title track, explicitly stating that he’s not out to glorify the hood. Shortly after he realizes that he’s “tired of kickin’ knowledge” because “niggas don’t ever listen,” and thus chooses to reach his audience with the big talk and battle raps of “Johnny 5.” “Dead or alive I’m the best, fuck your Top Five,” he proclaims even earlier, and while healthy confidence is to be applauded, the empty boast is another throwback to the days when unsubstantiated blustering belonged to a rapper’s standard repertoire.

Donnie Darko is a rapper that is able to connect the dots – but not the metaphorical, unseen dots whose connection would reveal unexpected insights the way generations of top-tier MC’s under and above the ground have done, but the dots you find in the Book for Rap Beginners where everybody can learn to string together sentences that make sense in a limited rap context and that teaches you how to vocally pack more cleverness into your bars than they actually possess. The message of “Redemption” is always either a warning or a lament – or both thrown together at random. The idea of humiliating an opponent by sleeping with his woman is firmly stuck in his head, and the ex-girlfriends that he remembers in a twinge of topic diversification invariably get tagged as hoes. On the upside, he’s a better MC than his guests and cuts a generally believable figure.

The beats fully support him in his position – for better and for worse. DJ Bless stays in the lane of dark, occasionally rock-influenced boom bap. Darko’s mindful not to get too amped by the beats, for example using a measured flow to create a contrast to the screaming sample and noisy riffs of “The Past.” Bless is fond of vocal samples, sometimes a little bit too much, especially when he manipulates and mangles them throughout a track. Ultimately his production style has the same slightly dated touch as his partner’s rapping technique. Die-hard fans of this brand of rap will find a number of tracks to enjoy, such as “Chinese Opera” with its revving retro-future synths or “Redemption” with its filtered hard rock guitars, the pumping ’80s pop feel of “Johnny 5” or the vintage late-’90s violin-laced boom bap of “Still,” and the Buckwild-ish “Nightmares of Reality” or the Snowgoons similarities of pretty much every other track.

If Donnie Darko was an established rapper we’d be likely easier on him since the rap game is full of veterans who still have an audience even after 20 years of the same old same old. While he sounds familiar, he himself isn’t really familiar. Criticism tends to soften over the years, so this being my introduction to Darko the harshness of my verdict is par for the course, really. “Redemption” is another ultimately uncreative rap album from guys who unsuccessfully try to recreate their favorite records from the Eastern Conference and Babygrande catalogue. Heartfelt introspection as heard on “Have Mercy” is a possibility, but there’s a much bigger chance that you will have heard it all before.