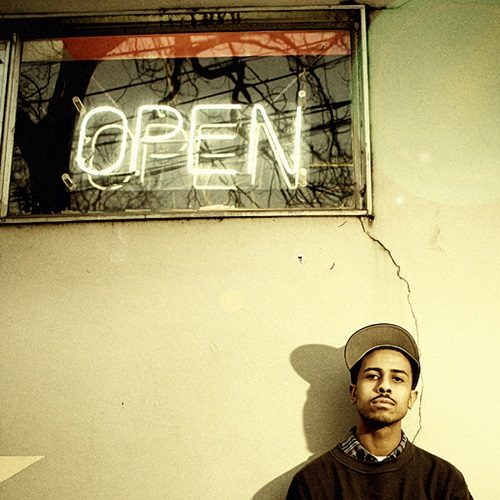 When it comes to the most underappreciated emcees in hip-hop over the past five years, a strong case can be made that Blu belongs near the top of the list. After collaborating with producer Exile to release the 2007 album “Below the Heavens,” lauded for its introspective and well-crafted lyrics, Blu established himself as one of the most promising up-and-coming emcees in the game and was named to XXL’s Freshman Class of 2009. Despite several subsequent mixtape and album releases, though, he has yet to achieve the mainstream success of his fellow “class mates” B.o.B., Kid Cudi, and Wale, instead opting to establish his niche as an underground alternative hip-hop artist. Of course, any true rap aficionado knows that popularity is not always correlated with skill, and those who have followed the Los Angeles native from the beginning are undoubtedly well aware of his prowess on the mic. “Open,” though, represents a new chapter in the 28 year-old’s short career, as Blu explores his versatility as an artist and takes a break from spitting rhymes to focus instead on producing.

Right from the start, it’s clear that the beats are the focal point of the album, as most hip-hop fans are unlikely to be familiar with any of the emcees artists that Blu hand-picks to lay the vocals atop his instrumentals. The guest artists generally seem content with taking a backseat and merely keeping up with the tracks, and there are even several times throughout the album when the lyrics are overpowered and become lost amidst Blu’s sample-heavy, energetic style of production. The lack of a standout artist is not necessarily a bad thing, though, as listeners will find that the sheer number of performers keeps things from growing repetitive, especially when one considers the variety of beats that Blu brings to the table.

The album opens with “Point Blank,” which features an aggressive set of drums and a muffled electric guitar riff that combine to create a busy and vibrant sound for rapper JustLee. Blu switches it up next on “Good Gracious,” with spacy synths, a faint high-pitched whistle, and a heavy snare and kick that complement Da1’s equally smooth delivery. “Gotta Be Free” oozes positive vibes, with jazzy piano keys and a fast-paced drum loop laying the foundation, and Aaron Smartz holds down the track with equally upbeat rhymes, as he raps: “Now I lay awake and wonder if I shoulda went to college/ And dropped 30 grand for a little bit of knowledge/ I’ve never been a scholar I only know one thing/ I don’t need to be a balla I just wanna be free.” “Taking The Day Off” slows things down again, though, with a heavy trumpet sample that glides across the track, and emcees ScienZe and Versis flow right along with the relaxed pace, rapping:

“They losin’ cause they snoozin’, we winnin’ cause we movement
They beggars that be choosin’, they choices don’t be movin
So screw ’em, and if they want some pointers I can school ’em
Science class in session now, who they think they foolin’
We groovin’, like Scooby Do but yo this ain’t no mystery
You try and test my future then you bound to see some history”

Of course, the album wouldn’t truly feel complete without Blu spitting a verse or two over his own beats, and fans will be happy to know that he features himself on several tracks. The most notable of these is “Steel Remains (Raw),” which features a heavy bassline, a crooning gospel vocal sample, and a flurry of vocal interpolation, and Blu is at his finest with lines such as “Oh you gangster with your shit when you’re bustin’/ But you stutter cause your mama used you spank you when you spit, buttercups/ Here’s some ass, just pucker up.” On the other hand, “Avenge of the Cheap Ass” has a more lighthearted feel, as Blu’s paints a picture of the everyday happenings in the life of a slacker with his straightforward lyricism mixed with clever wordplay.

Save for a few songs, though, the production almost always outshines the lyrics, making for a somewhat unbalanced listen. “Remember Me,” for example, is one of the smoothest and most soulful tracks on the album, but suffers from rather unoriginal lyrics from D Tail and Definite, as the second verse is nothing more than a list of golden-age hip-hop acts that inspired them. It’s tough to deduct points, though, given that “Open” was originally intended to be an instrumental-only release to showcase Blu’s beat-making talents, and in this sense the album certainly achieves its goal. Blu’s frequent use of samples creates an authentic and vibrant sound that resonates throughout the album, and although several tracks can seem a little cluttered at times, there is no denying that he brings a creative and experimental approach to producing that goes beyond the boundaries of traditional sample-based hip-hop. Those familiar with Blu’s work as an emcee should not hesitate to give “Open” a listen, and while it may not be for everyone, many will find themselves right at home grooving along with Blu’s unique production style.