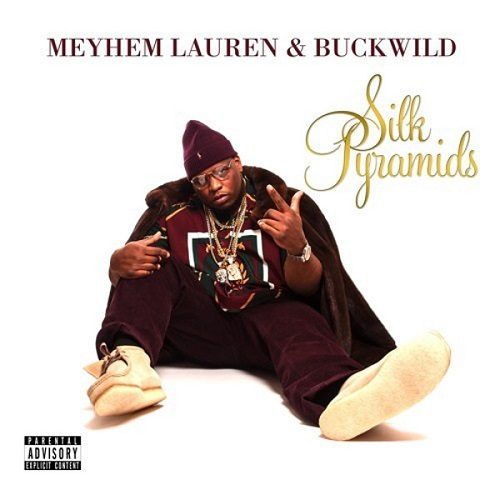 Looking not unlike the legendary Kool G Rap on the album cover, Meyhem has been cooking up traditional street shit for a while now, generating a healthy buzz that’s seen him drop numerous 12″s over the past few years. Meyhem is certainly an emcee that harkens back to the days of G Rap and Polo, yet maintains a far more digestible style that is a natural fit for sleigh bells and crashing drums. 2010’s “Got The Fever” is a gem that saw Meyhem increase his presence on other emcee’s records, teaming with favourites Action Bronson and Roc Marciano. It’s good to hear Buckwild produce an entire project that isn’t just a stack of DATs with old beats on, and “Silk Pyramids” will appease those craving a dope project from the oft-starved New York youngsters. One of those guys turns in an appearance here: Troy Ave. I’ll be honest, Troy Ave isn’t going to save New York hip hop, he’s not yet developed an individuality or lyrical prowess that can match previous kings like Biggie, Nas or Jay. His verse on “Street Hop” fails to deliver, especially when paired with Nas on the hook and a throwback production. It’s a missed opportunity, one that could have leant this album some much-needed buzz, given that Meyhem also finds himself in the dreaded “New York rapper” sub-genre that unnecessarily throws a burden over any emcee from the Big Apple.

Thankfully, Meyhem Lauren proves his worth on “Silk Pyramids”. It’s the linear, straight-talking method to (the) Meyhem that makes his music so refreshing. Even though I’m 27, I admire the lack of forced profanity on an album drenched in street slang – yet it’s no less grimey for it. Billed as in his 20s himself (according to Discogs.com), Meyhem already sounds older than he is, showing he has “Been Official” more than an overworked referee. While much of “Silk Pyramids” is spent painting a darkened image of inner city criminal activity and the lifestyle of those striving to survive, there are moments that highlight Meyhem’s creative side. “Can’t Fuck Em All” is suitably misogynistic, with humourous quips like “I stole your heart, you probably wish I stole your purse from you” adding much needed light-heartedness to such a generic concept. “100MPH” is the modern equivalent of a Ghostface and Raekwon collaboration (although I’m fully aware both Clan members are still actively recording). Action Bronson rears his heavily-bearded head once again (he’s everywhere right now!) and proves why he is the natural successor to Ghostface with his outlandish, vivid imagery and scathing delivery. Ambition and wealth are covered frequently, yet none as passionately as on “Where the $ At”. The hook is plain, chanting “We need more money” which given Buckwild has prepared a vicious beat for Meyhem and guest Thirstin Howl III to lay in to, makes it feel like a desperate plea for survival rather than exuberant greed.

Buckwild provides some memorable instrumentals; “Been Official” is almost hypnotic in its swinging vocal sample, “Love and Loyalty” is basic, yet brutal for it while “Aztec Blue” is a healthy blend of soul and heavy drums. The latter sums up Meyhem’s message well, thoroughly entrenched in the street mentality yet always holding out hope for a better life. When he was younger, he’d think about applying graffiti to building walls, yet now he is considering the property’s value and measurements.

This is by no means a record without flaws, far from it. Despite enjoying much of Meyhem Lauren’s work, “Silk Pyramids” is inevitably one-dimensional – it’s largely redundant topics that have been well-travelled (money, sex and survival). Buckwild also drops a few duds amongst the bombshells – “I Need It All” and “Q.U. Cartilage” are mediocre instrumentals, possessing an unfortunate tinny-ness. “Honey Champagne Sorbet” is nice enough musically, yet suffers thematically – it’s an inferior take on Roc Marciano’s style of lavish, fine diner rhyming that doesn’t work, simply because Meyhem is too street to pull it off.

It’s fair to say that Meyhem Lauren isn’t the saviour of New York hip hop, nor does he claim to be. He lets his music do the talking and for the most part, “Silk Pyramids” holds its own. It may well be a one-off collaboration, but Buckwild’s production suits the gritty delivery of Meyhem and with a bit of tinkering, a follow-up to this could be the record that convinces the masses of not just Meyhem Lauren’s skills, but New York hip hop’s ability to still throw out classic hip hop. This is NOT a classic, but what you’re getting is a consistent, often enjoyable slice of traditional street hip hop, that doesn’t get bogged down in throwback mimicry.