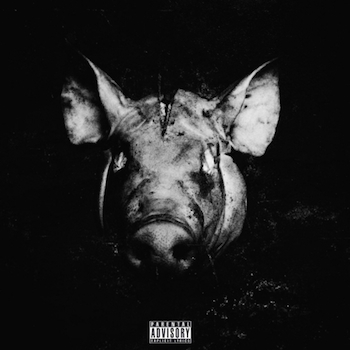 The metaphorical house of hip hop receives new tenants on such a frequent basis that inevitably, those who once graced the biggest room showcasing their skills to the wider audience and guests, end up being pushed aside and eventually find themselves down in the basement. Slaughterhouse would be the guys ciphering amongst the Rugged Mans and Canibus’ in the dirty, dank, graffiti-scrawled cellar, yet they initially entered the house as hot prospects, gracing the garden in front of thousands as they blessed top-tier productions hot out of the kitchen. Shady record deals and shelved albums pushed these lyricists aside as they struggled to push numbers on a level with weaker, inferior artists on the radio. Following an impressive self-titled debut that was a near-perfect blend of lyrics and accessibility, quad-core rhyme-processors Slaughterhouse are out to rectify the disappointment of “Welcome to Our House.” That album should have been so much better, especially with Eminem’s involvement, but was bogged down by sugar-sweet beats and lame hooks.

Given that the first Slaughterhouse mixtape was better than either of their actual albums, it’s relieving to hear “House Rules” is packed with experimental flows and wild spitting. More importantly, production is less polished and feels like it was chosen to promote the lyricism. It also gives the guys a more authentic, playful presence than the artificial corniness that was all too frequent on “Welcome to Our House”. From the first track, Royce Da 5’9″ experiments with his voice to the point of crooning and then transforms in to Bar Exam-mode on “SayDatThen”. If you enjoyed “Hell: The Sequel” by Bad Meets Evil, you’ll be glad you downloaded this free 46-minute collection of MP3s. LL Cool J once said on his “Mr Smith” album that he could fill The Source’s “Hip Hop Quotable” page for twenty years straight, but Crooked I actually tries to on “Offshore”, a mammoth 9-minute track that he dominates.

If you expected (or wanted) endless wordplay and braggadocio, you may be a little disappointed that much of “House Rules” feels more grown up and focussed. Broken homes are a frequent theme, with Crooked comparing the way his father disappeared without saying a word to David Blaine. Emotional verses are traditionally Joe Budden’s speciality, but the raw passion that the other guys have lends these songs a powerful edge. Crooked’s voice actually almost breaks on “Struggle”, a solo track that is a good listen but let down by a lame hook. Joell gets so hyped on “Life In The City” that the pop filter is still receiving therapy – yet as a refreshing, shorter slice of hip hop it helps break up the endless barrage of rhymes preceding it.

As far as DatPiff mixtapes go, this is jam-packed with content and definitely worth downloading. Shady Records may have helped pay the bills, but these powerhouses of rap need to drop an album that’s devoid of overblown productions that should be on an Eminem album, and stick to this smoother, more minimal style. I’m not one to offer tips to successful emcees, but given the tendency to drop a clanger on hooks, Slaughterhouse could really do with a DJ. Somebody like Revolution or Eclipse who can tie all the dope verses together so we don’t have to hear another underwhelming, overly wordy chorus. If they can get that balance right, hip hop may well let them back out of the basement back on to the main stage.