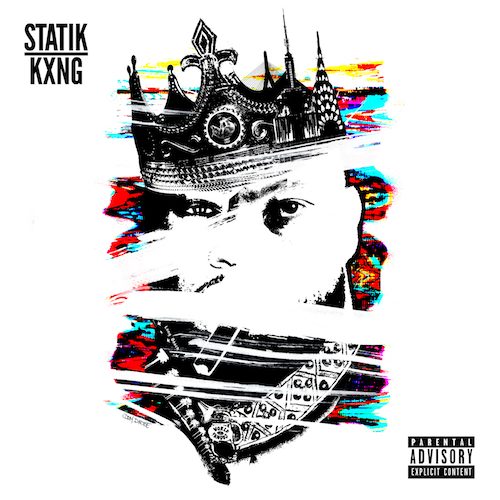 Collaborative efforts between emcees and producers are usually interesting. It makes you envision how a rapper would sound over just one sole producer’s beats. Massachusetts DJ/producer Statik Selektah is no stranger to such efforts, having been behind the boards for several emcees for both collaborations and compilations. His latest venture is with Slaughterhouse’s Cali-raised emcee KXNG Crooked (a.k.a. Crooked I), partnering together as Statik KXNG and releasing an eponymous album.

It’s fitting that this album was released via Statik’s ShowOff records. Because this duo is doing exactly that, but not in a bad way. But in a manner that’s literally music to my ears.

Starting with the first track, “I Hear Voices”, Crooked shows off his immense lyrical talent over Statik’s boom-bap layered beat with a keyboard loop, scratches, and thumping snares:

Amidst the wordplay and punchlines, Crooked still makes room to make poignant statements. On the tongue-in-cheek “Lost a Fan”, he speaks about police brutality, domestic mass shootings, and sums up the message in the hook, “I say some real shit cause I can/Aw, aw man, I just lost a fan”. The smooth jazz-tinged “Dead or in Jail” has a laid-back Cali vibe to it and has crossover potential due to the beat and female-sung hook, which is interesting because Crooked has a line in that song where he says, “If you do a song with me I’m probably just targeting your market”.

On “Stop Playing”, Statik laces an R&B-sampled beat which Crooked destroys with lines like “You haters hate quite enough/Like porn stars bleachin’ they anus, ALL you assholes need to lighten up”. “Magic & Bird” had potential given the title, but the beat and Crooked altering his flow to adjust to it didn’t help any. However, the flow-switch works beautifully on the autobiographical “Good Gone Bad”. Crooked displays a double-time flow in his verses and the hook. The sole guest appearance on the album comes in the form of Lawrence, MA native Termanology. Both he and Crooked go in lyrically on “Let’s Go”. Crooked handles the hook, taking a cue from the GZA’s “Labels” and name-checks several hip-hop record labels while Termanology lays down an intense verse that indicates that he hasn’t lost his hunger.

The last two tracks comprise the weakest parts of the album. “Bitch Got Me F—ed Up” is a narrative about touring and the groupies (and the baggage) that comes with them, but the melody of the beat doesn’t go with the lyrics. “Brand New S–t” fares a little better with dusty drums and horn samples. This one is also a first-person narrative, but it’s about Crooked macking on a girl who’s clearly a goldigger with a penchant for new material possessions.

KXNG Crooked is an emcee’s emcee. He has a flair for multi-syllable rhyme schemes, clever wordplay, and a commanding voice. All of those characteristics sound like they belong to punchline-driven emcees, but Crooked applies them to topical tracks and it works for the most part. Most of Statik’s beats here show why he’s sought after by lyrical emcees to bless a track for them. Together, “Statik KXNG” is an album crafted for listeners with keen ears for lyrical ability over classic production.