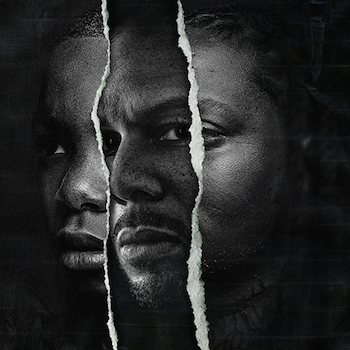 The title of Common’s latest offering “Nobody’s Smiling” immediately evokes memories of Eric B. & Rakim’s “In the Ghetto” for me. The interludes and scratches Eric put between the verses used that single phrase from R over and over again, and burned it into my brain as surely as if you had cracked open my skull and etched the line with a laser. “Nobody’s Smiling.” Why is nobody smiling? Because if you’re “In the Ghetto” life is hard. Damn hard. In Common’s hometown of Chicago, it couldn’t get much harder. The murder rate in 2014 is damn near Ebola hemorrhagic fever – live in the wrong neighborhood and sooner or later you’ll catch it.

Common’s not pulling any punches with the title – he wants to hit you over the head with this fact. The unfortunate reality is that nothing about this situation will change today, tomorrow or in the near future. Hiring more cops won’t solve it, nor will throwing more money at the problem, building youth centers and funding after school programs. The violence of Chi-Raq is deep rooted and treated as a way of life. Nobody’s smiling because nobody dares to dream it will get any better – and since it doesn’t the lowered expectations and feelings of hopelessness seem justified. Keeping your head down and surviving is a defense mechanism – hoping for change just leaves you as vulnerable emotionally as physically. Hope never stopped a stray bullet from killing a three-year-old.

“A cold world, that’s why we pack heaters.” – Kingdom

Surprisingly there is hope – and it comes from the same place it did on the aptly named “The Dreamer/The Believer” – the interplay between Lonnie Rashid Lynn Jr. and Ernest Dion Wilson – b/k/a No I.D. The two men collaborated on Common’s earliest and most beloved albums in the 1990’s, long before Common found the same road to the mainstream as Will Smith on silver and flickering screens. The years between the two albums reflect that Common’s increasingly active as an actor, but other rappers and groups have gone much longer between projects even without Hollywood to blame. This is the 10th full length album of original material since 1992 – an average of about one album every two years. There’s not much reason to complain about his output, especially when he delivers songs like “Speak My Piece.” Over a well chosen Notorious B.I.G. sample, Common raps with the swagger and suave sophistication that have been his hallmarks for the majority of his career.

“Yeah yeah, they like that
I write raps on the top of the world
Popular girls always wanna pop in my world
I pop out in the boroughs, and go to L.A. to get +Hay+
In the middle of the barn with a princess I laid
Yo, this type of shit happens every umm..
Once in a while, you know I won’t front with the style
Bring life to the party like a woman and child
From the land of the humble and proud, summers is wild
AHH!! Made the unmade-able
AH!! Go to parties I’m paid to go
Me and cuzzo talked the hustle
About doin good business like Rick and Russell
You I know I guzzle, red wine ’til it’s bed time
On my paper like headlines, she want the head shine e’ry time
My time, the streets is watchin like a Roley
Do it for the hometown and the homies, uh”

When Common is feeling himself few can do it better, but one of the best things he does on “Nobody’s Smiling” is spread the love around. You may not think the mature and arguably elder statesman of Chicago would have much in “common” with a wild and young artist like Lil Herb, but not only can he be found on album cover variants (as seen above) and on the opening track “The Neighborhood.”

Herb: “Can’t nobody stop the violence, why my city keep lyin?
Niggaz throw up peace signs but er’rybody keep dyin
Used to post up on that strip, I look like a street sign
I’ve been out there three days and I got shot at three times (Damn!!)
Felt like every bullet hit me when they flew out each nine
I be happy when I wake up and I have a free mind (That’s fucked up..)
I know haters wanna clap me up, watch the morgue wrap me up
But they can catch me later, I been coolin chasin paper
Where I come from ain’t no hope, if you was claimin that was major
Small crib, big fam, mom was workin, grammy raised us
No food in the refrigerator, I was bangin, pullin capers”

And we come full circle to “hope,” the thing that Herb said he didn’t have growing up, and the thing the title of Common’s album hints at now. Perhaps the generation gap doesn’t mean that much – Common’s Chi-Town and Lil Herb’s Chi-Raq are the same place on different days. There may not be many solutions but at least “Nobody’s Smiling” is not one of the problems. He spreads the love around outside the Chi – featuring L.A.’s rising star Vince Staples on both the aforementioned “Kingdom” and the sinister funk of “Out on Bond,” and soulful singer Jhene Aiko on “Blak Majik.” One of the hottest collabos has to be Big Sean though, as the duo tag team the finger-snapping “Diamonds” from Motor City to the Windy City.

Sean: “Reminiscin when I had er’rything on layaway
I’m rolling with me and my partner like it was Training Day (skert! skert! skert!)
Way before the ballin that was back off in the training days
I used to hit the barber chair and say, “I need that fadeaway”
Had a crush on what’s-her-name, them feelings never fade away
Older brother gang bang, bangin like an 808
Said you can’t take his chain away
Real player, you can’t take this game away”

The most hopeful note of the song and perhaps of the album itself is when Common raps “I’ve seen Len Bias, that shit scared me/you can go pro and blow everything you have in a flash… My time, man, precious like diamonds/Look through the glass, see what I magnify, man.” That’s quintessentially the opposite of YOLO. Common’s career proves that even in a war torn city like Chicago you don’t have to live once – you can keep on living for many years to come – making a difference (through his Common Ground Foundation) and making good music at the same time. If you didn’t get the deluxe edition your journey will be cut short a little early, but by the time you reach “Young Hearts Run Free” on the upgrade he raps “My lifestyle says it’s good to be alive now.” That says it all. Chicago can dare to hope.