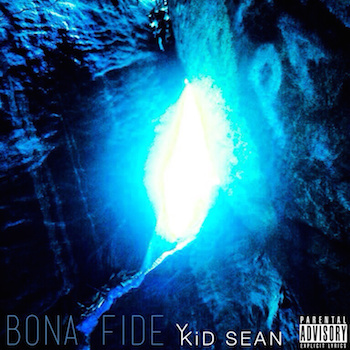 Biographical info on Kid Sean is hard to come by. I followed the link in his bio to Facebook and came up with the following facts: he’s from Bucks County in Pennsylvania, he’s the founder of an imprint called Young Kids, and his artistic influence is “life around you.” I’m not expecting a full FBI style dossier with black lines redacting out any sensitive information, but other than the “Kid” in Kid Sean being accurate (it appears he was born in 1994 – making him either 19 or 20 years old) I just don’t know, man I just don’t know. I don’t blame his publicist – she’s usually chock full of details when sending us new albums – but based on how little his Facebook reveals my guess is she didn’t have more to offer us than he does on his own.

I have nothing for “Bona Fide” to go on other than that the album was mastered by “a local engineer” named Mike Horn and the production credits for each track – names like Keith Science, Gravity and Blaise Palmer. By the end of the album I finally ran across one person I was familiar with – Clams Casino was responsible for “Time Changes” featuring Kev KiLL. It’s one of the more interesting tracks on “Bona Fide,” relying heavily on a kick drum and rim shot percussion at the start while slowly and steadily building up the background elements until it all melts into Kid Sean’s sing-song chorus. This is the kind of track that somebody who knows as little about Kid Sean as I do should be introduced to – it shows off his artistic potential.

Kid Sean doesn’t always seem as motivated as the “entrepeneur” line in his bio would indicate though. I’m sure when it comes to his imprint, his fellow artists signed to it, and the challenges of recording and touring he’s probably super focused. He may have reminders for appointments on his iPhone, a list of people to call/e-mail to get publicity, and a nice oak desk to sit behind and occasionally put his feet up on while having meetings. That’s not the impression one gets from songs like “High Life” though, where Sean seems motivated only by the next bag of indo he can acquire. The Sleezy E beat is smooth and the song is generally inoffensive but it says nothing about nothing at all.

“High life, I’m gettin high all day
My life, seems to be slippin away
Sometimes, I think I might just pray…
But I just can’t change”

The songs and topics of “Bona Fide” seem unfocused and aimless. Sean claims he’s “Young Shakespeare, writin out another play … I need a fuckin person who can relate” on “VHS Tapes” – but what does the title have to do with the song? Perhaps that’s why he feels “Misunderstood,” but instead of rapping about how nobody gets his style it’s a woe is me tale: “Pay for the bills and shit/Pretend to God I hit the lotto instead of a brick.” For me it’s the “and shit” that condemns him the most. It’s a throwaway phrase that adds nothing to sentences OR lyrics, just like “knahmsayin” or “y’knahmean.” I can’t go so far as to say somebody who wrote and recorded a 35 minute album or who runs his own record label is lazy, but the uninspired verbiage and infatuation with recreation on display do not blow me away. Kid may need to grow up a little.