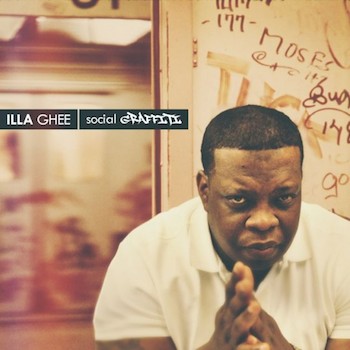 Illa Ghee is one of those emcees you’re bound to have come across as a guest star if you’re down with The Infamous. Dating as far back as the mid-2000’s the Brooklynite pops up on projects by Mobb Deep and The Alchemist, showing both where his loyalties lie and the respect with which they hold Ghee as an emcee. Somewhere along the line I missed his first two solo albums though, because the press kit for “Social Graffiti” proudly notes this is his third full length release. I know we can’t cover every single album at RR, but I’m flat out stunned I didn’t even know Illa Ghee albums existed. Discogs reveals they came out in 2005 and 2007 though, but judging by the “CDr” notation it seems they were self-made and distributed.

In a rather roundabout way what I’m trying to say here is that while Illa Ghee is a name you’ll know, the reader and the writer are in the same boat here – you probably don’t own an Illa Ghee album, and we haven’t reviewed one. “Social Graffiti” allows us to rectify that mistake. Ghee didn’t hold back on his most widely distributed album thus far – he’s loaded it up with guest stars and guest producers. Before you’re even two deep on the disc he’s already hit you over the head with Lil’ Fame of M.O.P. on the hook of “Salute the General,” which is appropriately hard and heavy. Ghee vows “I rhyme like I’m robbing a bank/with +No Limits+, I’m ’bout to do a show in the tank” and “I catch bodies – the blood is on the wall like paint.”

Ironically General Steele of Smif-N-Wessun fame comes much later on the album’s second to last joint – “On the Bklyn Side” – along with long time underground favorite Omar Credle. Flipping back to earlier in the album you find the equally heralded Sean Price helping him flow over a classic beat on “Speak to ‘Em.” Other quality contributions come from Guilty Simpson on “No Mercy” and JuJu (of The Beatnuts) on “Bruised Ego” just to name a few. The latter ideally showcases Ghee’s no-nonsense straight forward rap style: “The president of shootin’ at the President/I’m all about the Presidents that represent me/even though nuttin’ represented me like an automatic weapon/I automatically spit a new breed of injections.”

The thing that made the deep, gruff voiced Illa Ghee entertaining in his Infamous appearances was that they were a swift dose of testosterone that disappeared long before the NSAC could catch you on a random drug test. This album draws out Illa Ghee’s drawl over 17 tracks and 51 minutes, and I regret to say that’s just a little bit much when he raps like he chugged a molasses/cough syrup cocktail. Ghee compares himself to “James Worthy,” noting that he’s the guy who plays a role while letting Magic and Kareem get the glory, and that may not be as apt as he intended. Worthy’s career landed him in the Hall of Fame, widely regarded as one of the greatest NBA players of all time, even if he played second fiddle to more popular or spectacular Lakers on his own team. Illa Ghee has a few cameos on songs that reached a fair amount of rap heads by virtue of being modest chart hits (hanging just above or below Billboard’s Mendoza line) and has largely done his work behind the scenes. To be James Worthy you’d have to be on the court hitting those clutch shots in the seasons they won championships. Unfair? You could say so but I’m not the one who came up with the analogy.

Illa Ghee is good off the bench for a cameo, and with a supporting cast he’s pretty good, but left on his own for a long time he’s hit or miss. The hits are when he has a dark heavy beat that supports his equally dark style (“Razor Blade Vomit”) and the misses are tracks like “90” where he brags that his metaphors cause panic and “every sentence is another disease” – it seems clever but it’s actually absurd when you take a closer look. If he has a hot beat, a short enough track to not be tiring, or a guest star to share the spotlight with then “Social Graffiti” works. If he goes on too long on his own you start to overdose on his machismo. He’s got a role to play in hip-hop but it may be to share the ball with others rather than be the MVP.