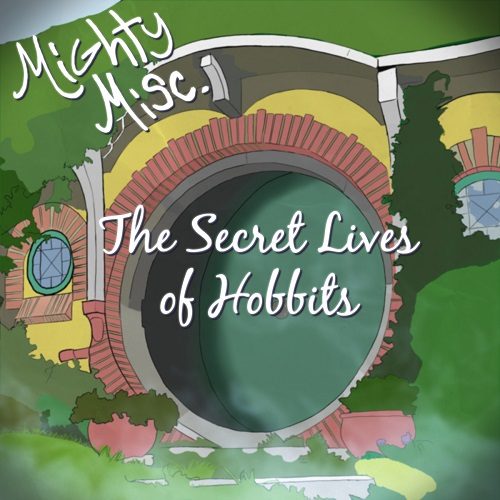 The Portland based Mighty Misc has two things going for him at the jump – he’s from one of the coolest cities I’ve never visited (believe me when I say Voodoo Doughnut is on my “to do” bucket list) and he unapologetically brags about how nerdy he is. HOW NERDY IS HE? He’s so nerd that he went to a Lord of the Rings movie marathon and was so moved by the experience that he came home to record a rap album about it. That’s right. Mighty Misc wants to take you on a hip-hop journey through The Shire.

Since Mighty Misc is being completely honest, let me be equally honest with you all when I say I haven’t read J.R.R. Tolkein’s books since I was in high school, and that while I saw the entire Lord of the Rings trilogy in theaters as it was released, I haven’t been to a single one of the Hobbit movies that have followed. I get enough of the references to understand Misc’s humor though, particularly since Misc insists on rapping as though he was a Hobbit himself. In “Love Sick” he talks about falling in love with a human (“a big person, no doubt a cutie/the kind of face that elves write song for”) and how he’s consumed with desire “to forge a ring and slip it on her enormous finger.”

The album is punctuated by interludes which sample from the lesser known versions of The Hobbit, such as the animated TV version of the 1970’s – right in the wheelhouse of my very early childhood. I probably watched it, I don’t remember it that well, but I doubt it compares to the movie versions they are making today – and it’s certainly easier to sample by virtue of being close to 30 years old. Clips from the modern films would get Mighty Misc a Sauron’s eyeball sized cease and desist. Misc is faithful to his topic matter throughout, even getting guests Dick Dastardly, Fattie Royale and Kordlyss to stick to the theme on “Shire Living.” The floating flute loop may be one of the best since Dr. Dre’s “Bad Intentions.”

None of this would be effective if Mighty Misc wasn’t at least a LITTLE bit cool. He mighty try to deny it but it takes chutzpah to record an entire album of Middle Earth hip-hop, and tracks like “There and Back (to score supper)” are as boom bap as any major label release. Let’s give due credit to Gus Woolery on production – his sense of production would make me happy to rock this album with the top down cruising around – no shame in that Hobbit’s game. It’s available as a free download if you so choose (again probably owing to some of the samples) but I have to say this is one worth paying for.