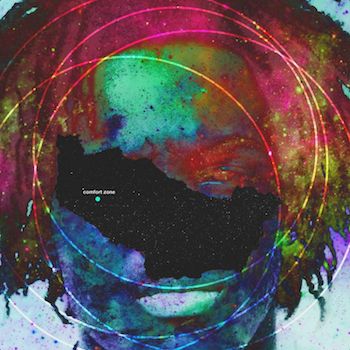 Since 2012, Chicago has been a breeding ground for young, up-and-coming hip hop talent. While most of the attention was focused on Chief Keef and the drill music scene, in late 2012 a rapper from the Westside named Saba quietly dropped his debut mixtape, titled “GETCOMFORTable.” The tape largely flew under the radar as rappers like Keef, King Louie, Lil Reese, among others became leaders of the new movement of Chicago hip hop. Two years later, and Chicago hip hop is thriving even more than ever – the drill scene has sort of quieted down since its initial hype, and the city has hip hop’s next superstar in Chance the Rapper. In a very cluttered scene, with a wide-range of styles and subgenres, it can be very hard for an artist to stand out. Which is why Saba’s sophomore effort, “ComfortZone” is one of the most exciting projects I’ve heard all year. “ComfortZone” is all about Saba getting out of his, and tells a very Kendrick Lamar-esque story of a good kid surrounded by plight and struggle on the Westside of Chicago. Not only is Saba’s narrative similar to the “good kid, m.A.A.d. city” rapper, but a lot of the album’s production – which Saba handles a bulk of – seems to have a TDE influence. Saba’s production blends a variety of styles ranging of trap hi hats, moody synths, soulful pianos, as well as some jazz (particularly on the second half of “Comfort Food”).

Saba has wide range of vocal skills as well. He often uses a rapid style delivery that blends aggressive rapping and melodies, reminiscent of Bone Thugs-N-Harmony. On songs like the opener “TimeZone,” he raps with great intensity, cramming intricate rhyme schemes in the verses, and slowing his flow down to a sing-song melody during hooks and bridges. On the very moving, “Scum,” Saba uses a slowed down melodic rap-sing flow detailing the struggle of Chicago’s black youth:

“They call us scum, from the city slums
They all think we idiots, like we really dumb, I pity them – the fool
Right to free speech, rifle, cheap drinks
Bible, we pray”

Common’s last album, “Nobody’s Smiling” was made to bring awareness to the violence that is happening on the South and West sides of Chicago. While it was a good record for what it was, I felt like it came up short in allowing the young rappers who witness the city’s struggles first hand, a chance to speak on the subject. Tracks like the aforementioned “Scum,” “Marbles,” “401K” all give first hand accounts of Chicago’s violence and struggles. On the spaced-out, down-tempo “401K,” Saba flexes some impressive wordplay in telling a story about debating whether or not to ditch school and a career:

“They told my little homie ‘Crime pay’
And he got scolded the next day
He on parole for the next few
He older with the same case
Earned his stripes like he signed with Adidas
Trade a W9 for a .9 millimeter
All my niggas did time, and got beat up
But I was never street enough to grow up and be a thug
Because I went to school everyday
I went to school everyday
Learned shit don’t matter, niggas shoot everyday
I had a 3.9 that shit didn’t matter
What’s a 401k?”

On what seems to be “ComfortZone’s” climax – “Marbles” – Saba tells the story of his stepfather, whom was involved in the streets. The song displays Saba’s excellent story telling ability, and reminds me of a Nas song, the way he uses excellent imagery to describe himself as a kid bonding with his new male role model. Saba also talks about his family on the MC Tree-assisted, “For Ya’ll,” which is dedicated to Saba’s brother Jimmy, whom is serving time in prison.

In a little over a year since appearing on Chance the Rapper’s “Acid Rap,” Saba is starting to gain momentum as one of the city’s best young rappers. At only 19, he possesses a bunch of talents that will not only bring him success, but also longevity. The musicianship in his production and the storytelling and sincerity in his lyrics, sets him apart from the sea of rappers emerging from Chicago. I would put “ComfortZone” in the top tier of the new wave of Chicago releases – along with “Acid Rap” and Vic Mensa’s “INNANETAPE.” And as he continues to explore outside of his comfort zone and grow as an artist and a person, I can only picture Saba getting better and better.