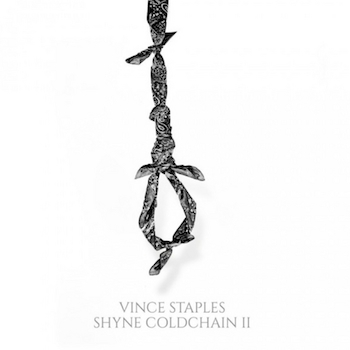 Public Enemy’s Chuck D. once said that hip-hop was Black America’s CNN. That may have been true 20 years ago, but it doesn’t hold up as well today. For one thing, rappers aren’t writing songs with endless speculation about missing airplanes, which is what CNN seems to have been reduced to in 2014. For another thing, if hip-hop is Black America’s CNN, then evidently the 1% is made up entirely of African-Americans, and the biggest issue facing them is which brand of alcohol to drink, which club to go to, and which woman to sleep with. Hip-hop has gone mainstream, and it has to cater to mainstream subject matter, namely partying. Then again, hip-hop started as party music so maybe we’ve come full circle.

Just when I start lamenting how shallow and nihilistic so much of hip-hop seems to be, along comes Vince Staples to remind me why I started listening to this music in the first place. Although affiliated with the Odd Future crew, Staples is more street than his fellow Wolfpack. That comes with growing up surrounded by gangs in Long Beach and Compton and having a father who dealt drugs, which he describes in heart-wrenching detail on “Nate”:

There’s your story on the cycle of crime and poverty, and how growing up in a dysfunctional home screws with kids. Do you want to know why the murder rate for young black men is so high? He explains that on “45”:

“What do you believe in? Die to have respect
I believe that the world got black neglect
Living broke, liquor stores where we cashing checks
Flipping dope, pimping hoes just to make ends meet
County blues, counting days till you get set free
Broke the rules so they shoot now we R.I.P.
Live and learn what you earn when you cross them streets
Caught a case cause he wouldn’t catch a fade
Living pedal to the metal cause he couldn’t catch a break
Couldn’t see the stakes, couldn’t see the trouble come his way
I’m still waiting for the day that we black and we proud
Till then we’ll be shooting niggas down to the ground”

Staples is 21, but he sounds mature beyond his years. Throughout “Shyne Coldchain Vol. 2,” he manages to both speak as a young gangbanger and as someone outside of the life criticizing it. He knows why his friends have been attracted to the lifestyle and the price you pay to be involved in it. It doesn’t come off as preachy or as irresponsible glamorizing. It just sounds as real and harsh and accurate as the noose made out of bandanas on the cover.

Production is provided by No ID, Evidence from Dialated Peoples, Scoop DeVille, and Childish Major. The beats have an old school feel to them, full of hard-hitting drums and sample loops. It’s a modern take on boom-bap which pairs nicely with his vocals and sets his music apart from the electronica and synth-based production that is predominant today. Staples keeps things lean; the mixtape clock in at 10 tracks with zero filler. The only features are singers James Fauntleroy and Jhene Aiko. There are no skits, no freesyles, no interludes, no intros. He ends things with “Earth Science,” a song about high school love that is a little more intense than your typcal teen love song:

“Shyne Coldchain Vol. 2” is an impressive album that shows a young man caring about his craft and growing as an artist. It reminded me a lot of the music of Public Enemy and Ice Cube that got me excited about hip-hop in the first place, but it doesn’t sound retro or nostalgic. There aren’t that many artists out there telling it like it is and reporting on life as they see it. Vince Staples is one of them.