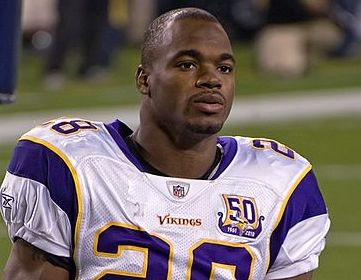 Adrian Peterson and Ray McDonald Give the NFL Another Black Eye

The NFL can’t seem to dig its way out of the hole they’ve put themselves in. The Ray Rice fiasco was just the tip of a much bigger iceberg, lurking beneath the surface all along, waiting to cause a Titanic PR disaster for the most popular and lucrative of all professional sports. San Francisco 49ers defensive lineman Ray McDonald is being investigated for an August 31st incident where he beat up his pregnant fiancee, and Minnesota Vikings running back Adrian Peterson turned himself in to authorities in Texas after being charged with “recklessly or by criminal negligence cause bodily injury” – in effect beating his son with a switch badly enough to cause cuts and bruises.

It would be too easy to say the NFL has a problem with entitlement for their athletes – millionaires who think they are above the law – given that not every player has a lucrative contract with a lot of incentive clauses. Not every player gets the kind of endorsement deals a star running back like Adrian Peterson does either. A lot of NFL athletes are hard working journeymen, paid better than your average blue collar or white collar employee, but also incurring a lot more medical bills during and AFTER their playing days than said same lower or middle class workers will. It has always been a tricky proposition to make a living as a professional athlete, not just during your playing days but providing for your retirement given how short the average NFL career can be. Those who don’t go broke have long hard roads ahead.

In short not every NFL player is the bad guy. Many of them simply show up every week and do their job – quietly and without controversy. They take their weekly salary and provide a nice home for themselves and their family, and maybe a few toys they can enjoy. Any running back gets beat up week after week by six foot, three hundred pound plus lineman probably SHOULD have a hot tub at home and a comfortable luxury car with reclining leather seats. The same goes for the defensive lineman who feels the pain from delivering hit after hit. Any editorial you read about the NFL’s woes, including this one, you should keep in mind that this is not a league full of spousal abuser and child beaters. The Ray Rices and Ray McDonalds of the sport should correctly be viewed as the exception and not the rule. It’s not a league full of sadists and thugs.

The problem for the NFL is that even the perception of a sports league that bends over backward to protect its athletes when they are accused of horrible crimes is not the public image the league wants to project. In doing so they brand even the innocent as guilty – leaving the public wondering what other skeletons in the closet have yet to be publicly revealed. The indefinite suspension of Ray Rice was already too little, too late (and it should have been a permanent ban anyway) and now two more NFL players currently on active rosters are accused of doing bodily harm – to not only their children but their UNBORN children. Adrian Peterson can try (and fail) to excuse whipping his son with a switch by saying it’s how he was raised, but Ray McDonald can offer no such defense for beating up a woman pregnant with his child. If the allegations are true it’s horrible, despicable, and unforgivable.

As we turn on the sonar and look deeper beneath the cresting waves, one has to ultimately wonder if the sport itself does deserve some of the blame. Concussion research is ongoing and even small contusions which don’t result in a player getting dizzy or blacking out can lead to big problems in the future – memory loss, muscle tremors, violent behavioral changes, and so on. Every big hit affects not just the receiver but the giver, and as a fan of both combat sports and NFL football I wonder if there may come a day where we as a society decide that too many good men have been turned bad by being hit too hard. Some athletes are undoubtedly at greater risk for brain trauma than others – they may have slightly thicker skulls, or they may play with a style less prone to injury, but the NFL’s black eye this week may be reflected in the black eyes of their athletes, long before a select few give those same black eyes to their wives and children.