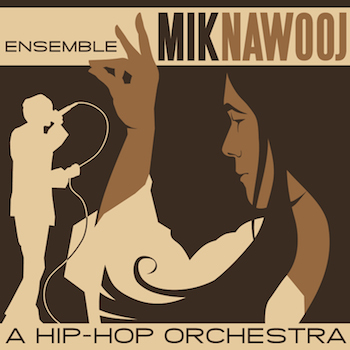 JooWan Kim (no relation despite similar pronunciation) is the driving force behindEnsemble Mik Nawooj, which you probably would have guessed based on the fact it’s his name in reverse. Kim is a classically trained pianist and composer, which might make you wonder “Why make a rap album?” My answer would be “WHY NOT?” Some of your favorite rap songs take their samples from classical music. Nas’ “Hate Me Now” samples from Carmina Burana. Xzibit’s “Paparazzi” is built entirely on Gabriel Faure’s “Pavane.” There are literally hundreds of examples so you don’t have to take my word for it – just think about it the next time you hear a dope track with some ill violin strings in the instrumental. Together with producer and vocalist Christopher Nicholas, Kim founded the Golden Fetus record label so he could explore the relationship between hip-hop and classical music further.

“Ensemble Mik Nawooj: A Hip-Hop Orchestra” is a project almost a decade in the making, but for something that’s been brewing that long it’s like opening a bottle of fine wine – quickly consumed once exposed to oxygen. 29 minutes flashes by in a heartbeat, even though three of the five songs are over six minutes long. The shortest may be ironic to some – a reworking of the Wu-Tang Clan hip-hop classic “C.R.E.A.M.” with brand new lyrics by resident Ensemble rappers Do D.A.T. and Sandman. The melody and the chorus will instantly strike a chord, but it’s played with increasing intensity as the song progresses, making one wish Mik Nawooj could take a similar approach to other RZA productions and recreate them with a whole new twist. (Video note – skip to 9:20 to hear “C.R.E.A.M.”)

The rest of the album is the ensemble’s own original productions, where songs like “Hope Springs Eternal” mix and mash up classical sound, spoken word poetry, rapid-fire emceeing and soulful arrangements of instruments. Even though it’s his group, Mik Nawooj’s band members deserve their nod: Carmen Lemoine on flute, LJ Alexander on drums, Michele Walther on violin, Annie Smith singing soprano, James Pytko on clarinet, Eugene Theriault on bass and Lewis Patzner on cello. If it strikes you this is a bit like The Roots where ?uestlove is the most famous member but the entire band makes up their sound, you’d be absolutely correct. Mik Nawooj Ensemble is more than the sum of their parts.

Much as I hate to pick apart something that I feel pushes the artistic envelope for hip-hop and strikes a personal chord for me, I think that the very “ensemble” nature of the group caused the rapping portion of the songs to play second fiddle – pun intended. Put it another way – the rhymes are an afterthought. Other than “C.R.E.A.M.” the music of Ensemble Mik Nawooj would be just as good with or without the raps, and if you’re catering to a classical audience that’s fine, but hip-hop heads will wonder why they are not more crisp with the lyrics. Considering Kim has been in the California rap scene for a decade, I’m dumbstruck that he didn’t reach out to somebody like 2Mex, Aceyalone, Del or Blu to contribute raps that would have had much more snap. “Ensemble Mik Nawooj: A Hip-Hop Orchestra” is still worth your time, but it’s over too quickly and could have been even more than what it is.