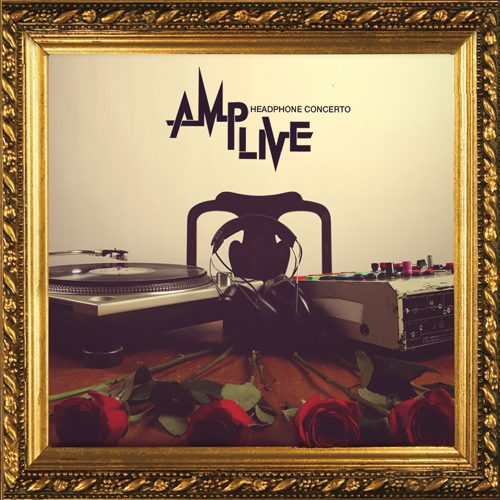 I’ve never given the name Amp Live any particular thought. He’s Amp Live, the musical half of Bay Area duo Zion I but frequently branching out to work with other Cali-based artists such as The Grouch, Eligh, WHY?, Planet Asia, Mystic, Lyrics Born or Latyrx. I would assume the name had originally something to do with sound equipment and live shows, along the lines of Amp Live ensuring that you’re hearing him and his music both live and loud. A ‘headphone concerto’ seems like the complete opposite experience – isolated, individual, refined. But rather than a new direction for Amp Live, “Headphone Concerto” is a continuation of the producer’s work.

Sure enough Amp Live adds various ingredients to his “Headphone Concerto” that make his intentions a little bit too obvious. There are bowed string instruments, or rather the SOUNDS we interpret as being produced by bowed string instruments, which, as we are fully aware, might be nothing more than a digital effect in a sound library, even moreso as Amp feels he has to demonstrate his maestro status by manipulating sounds, to the point where the project feels less like a piece of music involving a number of musicians that might constitute an orchestra (to stick to the classical terminology evoked by the title) than an excercise in post-production from a studio wizard who likes to pull the strings literally all by himself.

Maybe that was the plan all along, after all, ‘headphones’ stand for modern age music consumption (roughly beginning with the emergence of radio and telephony), whereas the ‘concerto’ experience can look back on a much older tradition. Although, before headphones became a must-have accessory for young people in the 1980s, they were typically marketed to adult listeners with preferences for classical and jazz. Be that as it may, by naming his first full solo outing “Headphone Concerto,” Amp Live demands the listener’s attention, and since we’re all short of attention, the stakes are high. Open-minded folks who dive head first into any sort of melting pot could well be entertained by some of the more experimental pieces on offer. (Bonus track) “Brass Knuckles” puts the good old saxophone into a modern electronic context. “No. 2 in B Minor Op. 3 – Muziki” builds a bridge between jazz and downtempo, its steady forward motion helping it escape the facile mood of such tunes. A subtly insisting horn section is at the heart of “Last Wall,” whose gentle bounce provides a welcoming entrance into the album with The Grouch and Eligh acting as dutiful doormen.

One thing that stands stubbornly in the way of Amp accomplishing his mission are the manipulated vocals. The phenomenon has been annexed by pop music for some time now, and in the context of Amp Live’s music (located in a border region between hip-hop and electronic music), it still makes me think of Far East Movement or later Black Eyed Peas. Although he can’t seem to leave the vocals at his disposition alone, there are enough mellow moments within more traditional song structures, such as the breezy “Signs” featuring Rebelution frontman Eric Rachmany (likely not related to Russian Romantic-era composer and pianist Rachmaninoff), or “Run Back,” a neo-soulish showcase from Amp Live’s side project Saint Tiimbre. Potential singles also include “Are We Dancing,” a collaboration with veteran Canadian electronic artist Ill-esha, or the two tracks critical of materialism featuring chanteuses Povi Tamu (“Hustle 360”) and Anya Kvitka (“Penny Nickel Dime,” with short but distinctive support from Minneapolis’ Prof).

Despite a couple of explicit cues to rap and hip-hop (“The Formula” with Sol and “IHeartHipHop” featuring a hand-picked Left Coast line-up where each vocalist is supplied with a different beat), “Headphone Concerto” is clearly a pop album. Amp Live can twist all the knobs he wants, the clean pop sheen to the album just won’t go away. The sonic extras, whether they come from the classical corner or electronica and EDM, give it an edge, just moreso a trendy edge rather than a personal one. “Headphone Concerto” offers a soothing listening experience, it is varied and structured at the same time, it employs real instrumentalists, and yet still it lacks purpose and foresight. At times it even comes dangerously close to the shallow waters treaded by an incredibly – and inexplicably – popular artist like violinist Lindsey Stirling.

Probably not everybody would subscribe to the notion of a contemporary West Coast school of hip-hop-influenced production, but if such a thing exists, will.i.am and Flying Lotus may well represent the scene’s poles, while “Headphone Concerto” finds Amp Live wandering in both directions without reaching a place he might claim as his own.