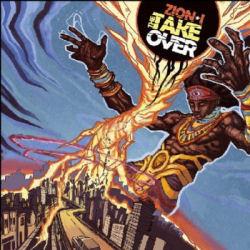 Zion I :: The Takeover

Zion I have been around a good while now, and have built up a dependable following. Conscious rhymes sit comfortably alongside fun throwback anthems; soulful horns intermingle with futuristic synths; in other words, it is one big party and everyone is invited… Backpackers, technorati, clubbers, philosophers… And their new album, “The Takeover,” is even more diverse and relaxed than usual. I think.

I say “think” because, to be honest, I haven’t got much of a clue about the LP. The advance copy that the label sent over contains the intro (which is about seven seconds long), four full tracks, and one-minute snippets of the TEN remaining songs. Without wishing to veer into “pissed-off critic” mode, this makes it very difficult to accurately review an album. It is also frustrating, since those four full-length songs contain a couple of stunning tracks.

When you are trying to review the rest of the album, however, it is akin to trying to make out how good an album is by listening to the preview snippets on iTunes – very difficult. Whilst I am fully in support of labels protecting their intellectual property, this is anti-piracy gone mad. More than that, it is a real shame – “The Takeover” was clearly shaping up to be a good album, but it feels wrong to give a false impression to our loyal RR readers.

Focusing on what was actually given to us, “Geek to the Beat” is strongly reminiscent of M.I.A.’s “Bird Flu” and the “Viva La Revolucione!” cries are sped up to great effect. It is a good start, and is improved further by the superb “Take Over,” complete with trippy, relaxed instrumentation from AmpLive and wicked rhymes delivered by Zumbi. The slightly obvious “DJ DJ” – the electro-rap homage to the 1980’s – is good, not great, but that merely paves the way for the stunning “Antenna,” potentially an early contender for one of the top tracks of 2009. Juxtaposing a lush soul sample with futuristic synths is nothing new, but the effect on this track is just perfect. When combined with the strange engineering – so devoid of any noise, somewhat like floating in space – the song is a resounding triumph.

And that, dear Reader, is basically where my opinion on the rest of the album must come to the end. It is frustrating, but I guess we will have to let the ever-playful Gods of Hip Hop fill you in on the rest whenever the time comes around. The guest spots from Brother Ali, Ty and Devin the Dude – no idea. But Zion I – on four songs, at least – maintain their sterling reputation as one of the most underrated acts around. As far as the score goes, it really should only be viewed as a token indication – keep in mind that Zion I have two albums in The Nines section – so take it as a neutral, impartial score. I guess this is one occasion you really have to make your own mind up.