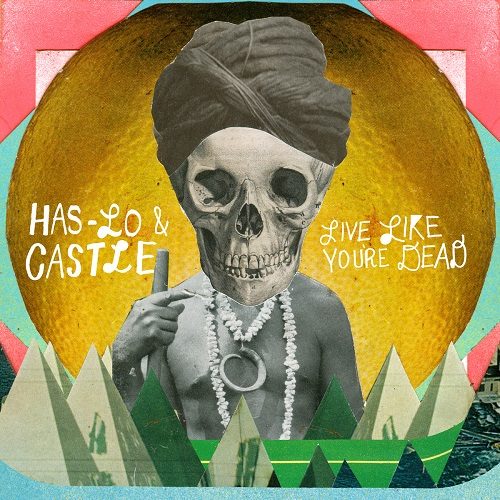 The album has a looseness, like the two went into the studio and knocked this out in a few days. You can hear them having fun with their rhymes, but also pushing each other to go harder. In my review of Gasface, I described Castle as “Redman if Redman had gone to college instead of doing hallucinogens.” After listening to this album, I’m revising that statement to say he’s like if Redman combined with Aesop Rock. He’s got some of the just-don’t-give-a-fuck sense of humor as Red, but some of the tangled lyricism of Aesop. His verse on “Good Feelings” illustrates what I’m talking about:

“Question: Can you call it morning wood when you wake up post meridian?
Afternoon wood doesn’t have a ring to it
Dumb questions that are posed ad infinitum
It’s the mary jane iron and the wrankles in my brainum”

Has-Lo can be too subdued as an MC at times. Castle livens him up, and he sounds energized on this album. Whether he is rapping about big booties in general on “The Big Ole Ass” or big booties in yoga pants on “Yoga Pants,” Has-Lo shows a sense of humor that I didn’t catch on “In Case I Don’t Make It.”

That isn’t to accuse “Live Like You’re Dead” of being frivolous. Sure, there is some lusting and shit-talking, but the title of the album comes from a Malcom X quote that starts off the album. Much like Open Mike Eagle’s “Dark Comedy,” “Live Like You’re Dead” is all about laughing to keep from crying. On “My Uncle,” Castle raps about losing faith and advice he’d give his younger self:

“Check, lost my faith on the path to enlightenment
That was feeling confused and feeling vexed
I hear that socially awkward’s the new sexy
Goddamn, I was born in the wrong decade
My high school years might have been less of a headache
Ill, but I try not to let that shit perplex me
If I could travel time I would cheat the system
Leave my young self lotto numbers and some wisdom”

Has-Lo manages to work through his issues while bragging on “Stubborn Vice”:

“I don’t work how I should, work like I ought to
They say to be a novelist you should read a lot of authors
I really don’t
I kinda think I know it all
I’m cold
I’d much rather never be involved
I’m not selfish, I don’t aim to hurt a person”

Production is handled by Has-Lo and Castle. The one guest is Arcka, who riffs off of “Bring Tha Pain” for “D.L.S., ” one of the album’s stand-out tracks. The beats are mostly built around sample loops, although “The Big Ole Ass” has some dirty synths as well. It’s a little Madlib, a little Dilla, a little A Tribe Calle Quest. Those are pretty solid influences to have, and the album has a soulful, low-key feel.

Much like Run the Jewels, there aren’t a lot of stakes with “Live Like You’re Dead.” It feels like the product of two friends who got together to make some music. Like Killer Mike and El-P, Has-Lo and Castle’s rap and production styles compliment one another. Has-Lo brings gravitas and introspection, and Castle brings the humor and head-nodders. The resulting album showcases the best of what both artists have to offer, which makes it well worth listening to.