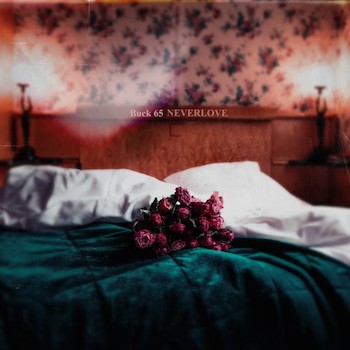 Buck 65 is an Juno award winning Canadian rapper – a statement meant to answer the question many of you asked before you clicked on this review: “Who is Buck 65?” There are many more ways to answer that question as well.He’s a former New York Yankees baseball prospect. He’s the host of “Radio 2 Drive” on CBC 2 every day from 3:30 to 7 PM. He’s the author of well over a dozen albums. His music is frequently featured on Trailer Park Boys. He’s been mentioned in countless reviews and interviews on this very site… and despite all that you still have to ask the question anyway.

In my college days Buck 65 was spoken about in rap discussions online in ways that made him seem like an urban legend – a mythical Canadian rapper who hailed from somewhere so far North it wasn’t even on the map. It turns out it’s not that hard to find after all – he’s from Mount Uniacke, which is 25 miles North of Halifax, the capital of Nova Scotia. Part of the reason Buck 65’s name always seems to pop up is that Halifax has such a vibrant hip-hop scene. In fact no matter where you’re from in Nova Scotia, it seems to be almost cliche to say you’re from Halifax if you’re in hip-hop. Classified isn’t from Enfield and Skratch Bastid isn’t from Bedford – they’ve been absorbed by Halifax and claimed as their own. It must be a non-issue – I’ve never heard any of the aforementioned artists complain about it.

Anyway there doesn’t seem to be an emcee “from” Halifax who doesn’t know Buck or speak highly of him. It probably helps that he produces too – he’s always literally in the mix. Despite the fact he’s highly respected, won a Juno for his album “Talkin’ Honky Blues” (if you don’t know that’s the Grammy Award of Canada), and should have mainstream recognition after twenty years of making hip-hop “Super Pretty Naughty” might be your very first time seeing Buck’s face. Buck and his female friend Francesca Anderson have created what’s either the ultimate tribute to or ultimate parody of the super-sextified uber-pop party rap that was ushered to mainstream popularity byLMFAO. It’s enjoyable whether you consider it flattery or mockery, particularly with Buck’s absurd verbiage like “Dolphins don’t got no sharp teeth – they nice… areas, I like your areas – none compare/I’m not wearing any underwear but real ice.”

Most of the time you’ll find a much more grounded Buck 65 pushing the envelope of hip-hop until he can transform it into a buckyball. The Alias and DJ Mayonnaise produced “Gates of Hell” is as fiery as the name suggests. “I tried to take my own life, and almost got away with it/Paid a delayed visit, decided to stay vivid/Here I am crooning, universe parallel/Mannequin factory, student nurse carousel/giant surprises on your minature birthday/I adminster first aid to a sinister mermaid.” WHAT?! The more you try to delve into Buck’s raps, the more of a mindf#%k they become. He does have one thing you can grab onto though – a streak of cynicism and depression that almost seems endemic amongst rappers who hail from cold climates. “That’s the Way Love Does” is beautifully tragic, as Buck quips that he’s “waiting for a train – a train that never comes.” The softly spoken “Roses in the Rain” featuring Adaline has an equally lovely melancholy about it, as she croons “bend… or you… will break.”

And if you’re getting the sense that Buck takes his pain and puts it to pen then shares it with the world, you’re getting the idea of what “Neverlove” is all about. The ultimate feeling you get from tracks like “Heart of Stone” (once again featuring Ms. Anderson) is that rapping is a cathartic process for Mr. Terfry – he just can’t bottle up the emotional turbulence of his life. “Hard as steel, blue and frozen solid/No idea what I’m supposed to call it/Merciless and savage, both of us are damaged/maybe more than most, put us at a disadvantage.”

I imagine some of your hip-hop hardrocks out there would call songs like “Danger and Play” or “Je Taime Mon Amour” too EMO for their taste. If you drive around playing M.O.P. twenty-four hours a day, if you eat steel and s#%t out iron girders, if you have completely disconnected yourself from ever caring about anyone in your life then go ahead and sneer at Buck as “emo.” Perhaps he’s too vulnerable for an artform that has often professed machismo over truth. “If I had Gatsby’s imagination, Rhett Butler’s style/Sam Spade’s determination, Mad Max guile/If I had Apollo’s lyre or Beethoven’s pain/I’d show you how I feel in all the ways I can’t explain.” If there’s a reason that Buck 65 is award winning though it’s precisely because he is the not-quite-underground yet somehow-not-quite-known rapper who wears his heart on his sleeve and dares you to punch him in the arm. “Neverlove” is a risk that’s worth taking.