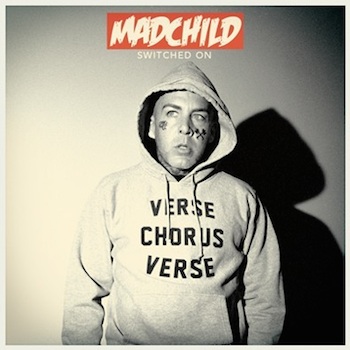 “Some rappers reach for the sky – guess I aim lower.”

It appears to be an inside joke that Madchild is calling “Switched On” an “EP,” because even the regular version of this album is already longer than most EP releases at ten tracks. The deluxe version that’s widely available for sale at retail and which I was sent for this review has no less thanEIGHTEEN and clocks in at over an hour in length. Either way I think it’s safe to say this is a full Madchild album, and even though he’s a fan of dropping EP length solo projects between Swollen Members releases, this is one of those times when Madchild’s got too much to say to hold back.

Holding back has never been a problem for Mr. Bunting anyway. On “Hellbound” he opens with “I’m known for being late/famous for being a f#%!-up.” Madchild’s most endearing quality is that he’s relentlessly truthful, even when it comes at his own expense. Shane has detailed at length how substance abuse nearly derailed his career right at the point he became famous recording and touring with the Membership. Now sober and more determined than ever to succeed, Madchild seems hell bent on bringing his “Hellbound” raps to the masses. “Now I’m getting a second chance, I ain’t gonna blow it/pray to God and give thanks, man you f#%@in’ know it.” Dark imagery circles him at all times, even as he namechecks a classical composer like “Amadeus.”

Madchild still has the ability to surprise me after all these years though, as “Tom Cruise” appears to be a sly reference to the fact the Aspect produced song samples from the Sega Master System game “After Burner.” It’s a game about taking off from an aircraft carrier and shooting down enemy plans – and Tom Cruise starred in “Top Gun” which had a similar premise. This is all fairly obscure though unless you were born before 1980 and grew up around the time both the game and film came out. Mad shows off his penchant for punchlines throughout the song “I write in short form, cause I’m a warped dwarf that gargles chloroform.” Every now and then though he raps on something surprisingly mellow sounding like the Chin Injeti produced “On One,” though it only takes him a couple of bars to spray testosterone fueled flows everywhere.

For SM fans the production is familiar and friendly as Madchild works with C-Lance and Rob the Viking repeatedly throughout the album. The familiarity doesn’t breed contempt, but if you said that tracks like “Blitzkrieg” and “White Knuckles” sound just like his other solo projects, you wouldn’t be wrong. The latter in particular is almost the prototypical song for Madchild as a soloistOR in the crew – ominous bass, a methodical drum track, nightmare pianos and haunted background sounds. Neither the group nor Madchild individually could ever be called “horrorcore” but they certainly lean toward a darker and more gothic rap style than their contemporaries. How much you enjoy “Switched On” depends largely on how familiar with Madchild you already are. This is not a starter album – it’s too fueled by a Mad vitriolic rap rage for anybody who doesn’t know him to jump in with both feet.