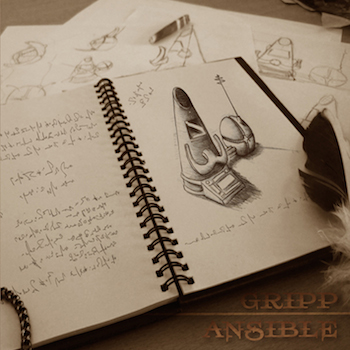 “The rap version of Eeyore is back in the booth to record again.”

Gripp first grabbed ahold of us back in 2008. Reviewer Justin Chandler described him as the difference between “independent” rap and “REALLYindependent rap.” The Providence, Rhode Island native boasts the kind of credentials that might have gotten him pigeonholed as nerdcore – a master’s degree in computer science for one, owning and operating his own record label for another, and self-producing and self-mastering his hip-hop albums would be the icing on that metaphorical cake. As long as we’re being nerdy though let’s just say that this cake is NOT a lie. Instead of letting his background and education stick him in a lyrical trap where he’s only allowed to rap about video games and Star Wars, “As Knowledge Kills Beauty” was a heartfelt AND well produced album that Chandler summed up ideally as “hip-hop with meaning and purpose.”

Gripp’s “Ansible” almost got axed by accident. Even though we received his new album with open arms earlier this year and a review was planned, one thing after another went wrong between January 3rd and now. Life has a way of screwing up the best laid plans of mice and men, and without going into sordid detail, it seems like 2014 has been the year just about everything that could go wrong did. Having just completed major structural repairs to my home, Gripp came along at the right time with a polite inquiry: “Hey there friend – are you still going to review my album? If not I’d appreciate some feedback so I can correct my mistakes the next time.” Stunned I realized that three-fourths of the year had gone by and no one on staff had gotten to “Ansible” – for which I can and will only blame myself. I could have taken the ball and run with it, or I could have passed it to someone I was sure would have been as interested as I, but if the saying “better late than never” means anything I’m here to tell Mr. Gillson in five words “You did absolutely nothing wrong.” It was just life man – life got in the way.

“We should be so lucky – to elevate more
Move past the dark age lore, and find a way to carve a place for
some rationality – wait
Look what we’ve already done to the mortality rate
And we’ve barely begun – it’s really baffling how many pathogens
are left to attack, the next task that we’re grappling
Or maybe travelling – extra-solar manned mission
Superluminal Ansible signal transmission
We should be so lucky – to see a quantum machine
but we’ve barely conquered the steam engine
but it’s not an impossible dream…”

It’s fair to say that Gripp (and guest emcee Greydon Square) may go over the heads of some listeners on “We Should Be So Lucky.” That’s a good thing. Gripp’s hopeful message that science and technology can cure disease and allow us to explore the galaxy is not the kind of message suitable for the lowest common denominator. Gripp is not intentionally being anti-trap and quixotically tilting at today’s rap windmills – he’s just doing what should come naturally to every artist in expressing his own point of view. So much of the music released in ANY genre attempts to mimic the last commercially successful superstar in a crass attempt to make money, while Gripp’s self-produced and distributed music is an incredibly personal statement that may only make money by accident. Art is often like that. Vincent van Gogh was virtually unknown in his own lifetime.

“I’m in a vampire body, sucking ’em dry
Shrunken heads in my apartment, set up in a line
On the mantle like the ugliest shrine, there’s something to find
Funny how it sneaks up and comes from behind
Crushes the spine to dust, blows it fluttering by
And suddenly we’re all looking hungry alive
We add to our collections, impressed with how they curl their lips
These are the faces of every woman and girl I’ve kissed
Sick on the tilt-a-whirl of tips
Paint chip tongues, a wizard doing Merlin tricks…” – “Make It Rain”

Gripp’s statement is not a refutation of capitalism or its values – “Make It Rain” is just his refusal to imitate those emcees who are “throwing stacks of ones (while) telling women drop it low and back it up” all while “sipping Patron (and) calling women bitches and hoes.” Some of rap’s most well known iconoclasts like D-Sisive rap from a deep inner sense of torment, but Gripp fights his inner darkness and urges both himself and listeners to “take your fangs out.” “Check Me” featuring Shane Hall may not be the traditional boom bap but I could still bop my head to it in the whip even while appreciating the self-directed lyrics he warns himself with: “Catch me being ignorant then check me/heard me saying something bigoted then check me.”

It would be a bit cliche to say that Gripp is a “thinking man’s rapper” but it certainly wouldn’t be a lie. It may take time for Gripp to release his albums, but it’s also clear that he’s not simply throwing out mixtapes just to keep his name in the mix. If it takes a few years between albums to craft gems like “On Seeing Sagan in the Clouds” and “Be Alright” then he’s worth the wait. The self-deprecating humor is never a miss: “I’m a work in progress/a fuck up, but I’m honest.” If Gripp is anti-anything he’s anti-fake, because “Ansible” shows he treasures honesty even if it winds up making him look less spectacular. If you catch him pushing a luxury whip it could only be a publicity stunt, because Gripp simply refuses to paint a false portrait of success. Instead of spending time following trends, Gripp creates music worth following.