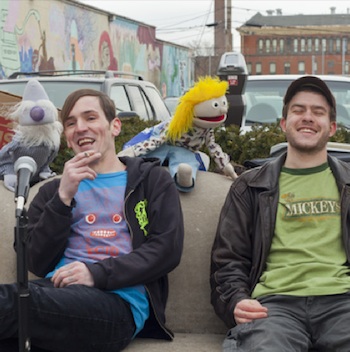 I have a tendency to associate Columbus, Ohio with dope underground rap music – after all it’s whereBlueprint andIllogic hail from. At some point somebody from Columbus will send me a horrible album to prove that I’ve developed an unfair and overrated perception of Columbus as a place where something in the water causes a genetic evolution toward rap greatness – an unseen DNA helix fracturing and combining to bring forth shit I love to bump.

Happy Tooth & Dug won’t be the ones to change my mind.

Secretly I hoped they would break the mold. Some weeks I think I’m too damn selective about what I choose to review. I think I untentionally create the impression that I love everything I write about, when it’s often that I just won’t review something that strikes me as terrible right out of the gate. I do make exceptions at times, out of some inner desire to warn listeners, or simply because I feel guilty that somebody went to the trouble to send me a press kit – I should say SOMETHING even if it’s terrible. Even so there are weeks I just kick myself for handing out more 7’s than a Vegas slot machine ever will. Am I actually choosing stuff that good to review, or do I like way more than I should?

Damn it. I like Happy Tooth & Dug. They hooked me from the beginning with lines like “I’m the reigning champ of nothing more than recognizing pestilence” and Squidbillies references like “Death to America!” It’s even more appropriate that shortly after those words are spoken the background instrumental takes on a Kentucky bluegrass quality, plucked like you’re sipping moonshine on the porch while making hip-hop. The self-deprecating lyrics of “Smoke, Steam and Dust” tickle my rib bone – right down to them reading it like a movie script and announcing “pause for dramatic effect” before taking themselves down a peg or two.

“You probably mistake me for having a stake in the outcome
Sore bones and hormones, too old to be this young
Naive pipe dreams surviving when you bought the album
Everything sucks except us – give us your money”

Rappers should be willing to take chances, and songs like “Waking Hurts You, Go On Dreaming, We’ll Help You” takes more than a few. Besides the obscenely long song length of 7:48, the verses are delivered first in a lackadaisical trope over a non-traditional rhythm, then sing-sung along in a sarcastically sly style: “replace me with computers, there’s no maybes in the future, work really doesn’t… all we’re making is consumers.” It reminds me of the earliest days of anticon. and Rhymesayers, when a new generation of rappers dared to make music that was either too progressive for the radio or too wack to ever be played again – but it was never boring.

Are Happy Tooth & Dug “hipster hip-hop?” I can’t say for sure. In fact I may live to regret having created that term, as it will surely be used again elsewhere, and in a much less complimentary fashion. There are entire books, blogs and movies dedicated to how much hipsters suck. One of the defining traits of hipsters seems to be putting on an air of being cooler than everybody else in the room, and while Happy Tooth & Dug give me that impression, it doesn’t seem like they’re faking it. It just seems that their approach to making rap was a conscious decision to not give a fuck about the traditional topics rappers should discuss or the typical styles rappers should emulate. Happy Tooth & Dug are different – and a little weird – and that’s good. Even if I like too much of what I hear, I can’t hate Happy Tooth & Dug just for an excuse to hate something – even if they’re too cool to hang out with me if we crossed paths in a Columbus bar.