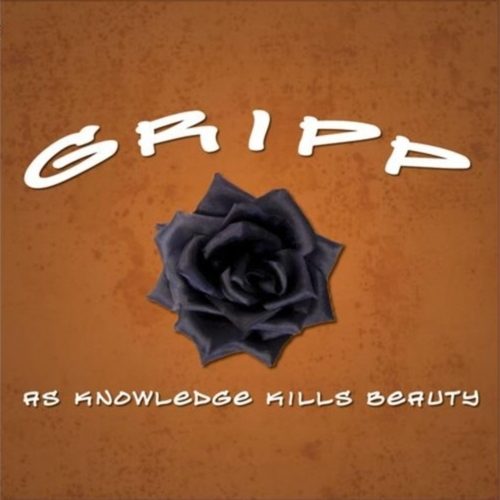 There is independent rap and there is really independent rap. “As Knowledge Kills Beauty” by artist Marshall Gillson, AKA Gripp, fits squarely into the latter categorization of the genre. The release drops with no major label to speak of; rather, just a man, a mic, a mixing board and a few rare guest spots. But is that really enough in this day of bass-heavy beats and silky smooth production?

Truth be told, Gripp comes correct with a very complete release that eclipses the status quo rap disc. There are a few distinct reasons that he pulls off the difficult task of carrying a whole album which will be expounded upon herein.

The first main ingredient in creating this artistic endeavor is the unwavering sense of continuity throughout. The fact that the featured artist produces, records and mixes all of the tracks, but one (“I Rhyme Better Than You”), is probably the reason that it sounds like a singular expression of musical goodness. The lyrical bars having a clear and concise consistency, too. From the jump off, “Card In Sleeves,” the general feeling of the album is laid out in full with its entrancing keys and meaningful politically-driven lyrics:

This is just an excerpt of some of the more substantive subject matter on the CD, yet it is the norm on “As Knowledge Kills Beauty.” This is hip-hop with meaning and purpose. Luckily Gripp manages to mostly avoid the pitfalls of sounding too preachy or corny in the vein of spoken word, unless he purposefully goes this route (“The Fall”).

From a production standpoint, none of the beats would truthfully be described as banging, making the main focus on the lyrical content; however, there are enough textures to walk that fine line between redundant and complimentary. For instance, “That Won’t Work” wisely implements the use of some acoustic guitar performed by Alan Mendelsohn. The most notable misstep on the production tip would be the interlude-esqe track entitled “I Can’t Dance,” which is an instrumental assumedly meant to be a jab at the simplicity of dancehall rap as the song fades into a vocal sample repeating the words “turkey pot pie.”

The previous point brings up to the second aspect of the LP which works in Gripp’s favor, the concepts. Most rappers are happy to show off their ability to drop a concept on one, maybe two cuts on their album to prove that they are not just spitting nonsense, but Gripp does it regularly. “Studio Skit,” for example, features a grizzly-voiced rapper dropping some stereotypical lines like “when I step to the mic, I come with that ammo” and other such material, which is also directed to make fun of the tired themes of drugs and guns. Thankfully Gripp lets loose on the same stripped down bass beat on “I Rhyme Better Than You” to create vicious dichotomy on how he feels rap should sound as opposed to what is too often offered up. There are certainly listeners that have grown tired of the norm so he effectively speaks to those that have lost a certain amount of interest in the genre.

Perhaps the best banger on “As Knowledge Kills Beauty” is another conceptual masterpiece in “Last Man Alive.” This one comes from the viewpoint of a man left alive in an otherwise apocalyptic scene as he opens the story with this creepy atmosphere, “I wake up to silence and the smell of flesh burning,” but it only gets more creative as it concludes in a very philosophical way.

There are times that the album falters on both major facets of beats and rhymes. While Gripp’s writing is concise and often deep, his flow can get occasionally repetitive, often using the same rhyme scheme, voice and flow on much of the project. Also, since almost all of the production work is from assumedly the same board or more importantly mind of Marshall Gillson himself, one might be inclined to say that it can get tired too–especially if you are into the pulsating sonic sounds of a Just Blaze, or similar popular producer. Most of the complaints are generalizations and do not represent a fair interpretation of the album. Gripp is a fitting name for the artist in question; he has a complete grip of his music and a true vision of real hip-hop music. It is a great triumph that a single man on a shoestring budget can orchestrate and write a complete piece of music. And if that man stays true to oneself and puts in the work necessary, even the most independent of independent rap music can be quite good.