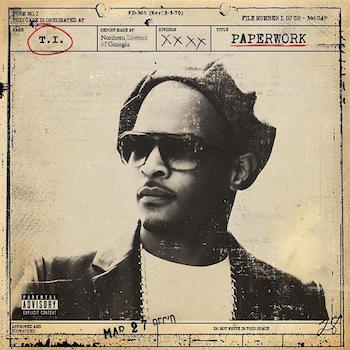 T.I. has ambitious plans for “Paperwork” – so grand that I admire his hustle but also so grandiose that I worry if it will all come to fruition. He talks about wanting to release “Paperwork” as a trilogy of albums 6-9 months apart, and how he wants to film a movie to illustrate the subject matter of the songs. The rapper who once aptly described himself as a “Trouble Man – always in trouble man” needs to stay free of legal and persnal drama for long enough to make that possible. There’s no doubt his heart is in the right place and his intentions sincere – how many rappers do you know that stopped and took the time to stop a suicidal man from jumping off a building? (True story.) I just want Cliff to worry about himself though. If the “Trouble Man” could go on a five year run where he’s trouble free, he’d not only achieve all of his personal dreams but be too large for VH1. His reality show would have to be on NBC or CBS.

“One question I’ll bring forth
Should you choose to ignore it or choose to explore it
Your children’s future right now
Would you die for it?” – “About the Money”

A typical T.I. album is loaded with singles ready to blow and “Paperwork” is no exception, the latest of which is the Tommy Brown produced “New National Anthem” with Skylar Grey crooning the hook. Obviously some of the sentiments are going to have to be cleaned up – like when he says “What the f#@% you know about being a black man in America?” He’s clearly inspired by the shooting of Trayvon Martin though, and the song would be timely even if it had been recorded two years ago given the shooting of Michael Brown this summer shows that history seems (unfortunately) doomed to repeat itself. T.I.’s non-lyrical notes in this song seem as important as his actual rap:

“A message to my people
Stop waitin on folk to help you
Help yo’self, start with you
Get yourself out, reach back, get somebody else out
And that’s the way we gon’ get ahead man”

The song that generated the most buzz to date though is the DJ Mustard produced “No Mediocre” but for unintentional reasons – he became embroiled in a feud with Azealia Banks and his protege on the song Iggy Azalea became embroiled in a feud with Nicki Minaj. The latter two have stated that the media took their alleged beef out of context, but I haven’t heard of Ms. Banks apologizing to Tip or vice versa. Regardless it’s the kind of buzz that Mr. Harris can actually use – it beats the kind he gets for being sent to jail on weapons charges or back to the pen again for violating his probation.

At over 75 minutes long for the deluxe edition, T.I. is certainly giving fans their money’s worth for the 2 year wait since “Trouble Man” came out. Familiar friends find themselves both guesting on the tracks and producing them. Long-time collaborator DJ Toomp creates a cruising anthem that’s just a tad too late for the summer on “About My Issue” (but in warmer climates like the South that may be a non-issue) and “On Doe, On Phil.” Doe B factors into successive songs with the follow-up “Light ‘Em Up (RIP Doe B)” produced by Pharrell, who also adds his musical magic to three other tracks and makes cameos on two. Chris Brown croons on the sultry Sak Pase track “Private Show,” which could be background music for he and Tiny to get nasty by (if you’ve seen their show you can’t NOT picture it). Usher also gets into the mix on “At Ya Own Risk” and even The-Dream makes ladies want to cream on “Let Your Heart Go” (though for my money he’s the weakest of the three).

The thing that makes T.I. appealing though has never been his producers, guest stars, or general notoriety for personal and professional drama. At the heart of it all is Clifford’s Bankhead drawl and his propensity for weaving movies with his words that DON’T require an accompanying movie to explain themselves. T.I. raps about the truth of his life, where he came from, and what he’s going through today. He pours his soul out into his songs, allowing fans of all backgrounds to identify with him for his honesty. To bring the review full circle let’s go back to “New National Anthem,” where Tip’s pain is palpable:

“I was raised in a decade of hate young nigga
Always dodgin police because they hate young niggaz
And we hate them too – .38 in him shoe
All the changes the system will take him through
He ain’t a killer but he will if you make him do it
Homicide he’ll ride, they’ll put him on trial
Let him have a life sentence then do it with a smile
And he only 19, he ain’t even had a child
As a child told his momma he’ll be gone for a while
And she cried, still they just put him inside
Now she all on her own cause her other son died
Listen to the politician as he lied and he lied
He a snake in a suit tryin to hide in disguise”

Even though Tip rapid fires his delivery on the song every word of his intent comes through as clear as Malcolm X “rapping” about the hate that hate made. Can there really be hope in blighted urban communities? T.I. believes that if he made it, anybody can. Though that message of hope is oversimplified here, and some might even call it naive, that difference between T.I. and his peers is an essential one not to be overlooked. Some rappers seem to be trapped by the trap, to the point they want to embrace it, and even trap their peers in it. Clifford Harris sees it differently. He’s not disowning where he came from, but he also believes life has more to offer, and that’s a vision that’s worth sharing.