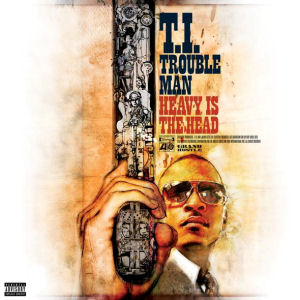 The 1972 blaxploitation film, Trouble Man was the story of a private detective that simply went by the name of T. He also does what he can to help people in the neighborhood…but never for free. Eventually he is framed for the murder of a local crime boss’ man, setting off a city-wide war. Tons of double crossing abound, but at the end of the day, everyone learns that you don’t mess with Mr. T. The score and soundtrack were produced and performed by Marvin Gaye, who was making his first foray into the world of blaxploitation cinema. Fast forward to 2003 and we have a new T, T.I. to be more specific, who had dropped his second album, “Trap Muzik.” Although he was fresh off of what I like to refer to as his coming out party on Bone Crusher’s “Never Scared” and his own “24s,” there was another song that caught my ear. I often like to say I predicted that the David Banner-produced “Rubber Band Man” would be a hit, and it was. A portion of the hook to the song goes like this:

Fast forward to 2012 and we can certainly say that Tip has seen his fair share of trouble over the years. I’m also sure that the “couple hundred grand” has ballooned quite a bit and there’s much more than Chevys in the Harris family garage now. The ongoing battle between T.I.P. and T.I. has been well chronicled, so I won’t really get into the specifics here. In fact, some of the incidents make their way onto the album in the form of short skits. So here we are now…T.I. is out of prison and off of probation. Will the result be something closer to “Urban Legend” or “No Mercy?”

“Trouble Man: Heavy Is The Head” features guest appearances from Meek Mill, A$AP Rocky, Pink, Lil Wayne, Akon, R. Kelly, Cee-lo Green and Andre 3000. Production is provided by the likes of DJ Toomp, Jazze Pha, T-Minus, Pharrell, Hit-Boy and No I.D. among others. The album art looks like it’s straight out of a film starring Fred Williamson or Jim Brown. Continuing the “Trouble Man” theme, upon beginning the album, the first voice we hear is that of Marvin Gaye on “The Introduction.” The track is an unapologetic realization that T.I. is going to be who he is and there’s no change in sight. The “call me Trouble Man” line from 2003 re-emerges and is reworked to fit the song here as well. We get more of the same on the Meek Mill-featuring “G Season” and “Trap Back Jumpin.” There’s something about T.I. over a Toomp track that makes the listener wish that he would have handled a larger share of the production and that’s the case with the latter of the two tracks here. Beginning with the slow-rolling “Wildside,” the album presents short skits seemingly representative of trouble in various points of Tip’s life. The first skit opens and closes the aforementioned “Wildside” and seems to represent a time in T.I.’s life that dates back perhaps to the late 90s with him and his compadres embroiled in a high speed police chase.

The Lil Wayne-assisted “Ball” is currently getting tons of airplay and a lot of love in the clubs. The tract is frantic and sounds like a hybrid of classic Cash Money and vintage Three 6 Mafia with a new age twist to it. One of the album’s standout tracks is “Sorry” which features an appearance from an overachieving Andre 3000 as the two ride out over the Jazze Pha track and T.I. questions just who he should be sorry to and what he should be sorry for. Tip once again promises that he will always be as stubborn and bullheaded as he is now. Three Stacks takes a slightly different approach, even going as far to apologize to his partner in rhyme for messing up the tours and such in the past. “Could You Learn” begins with another of what I’m choosing to call the “Trouble” skits. This time, the scenario is the events that led up to T.I.’s arrest and subsequent federal weapons conviction back in 2007. With a little help from R. Kelly, Tip dares to ask if his lady could learn to love a Trouble Man. Of course it’s a little easier now, but perhaps not “like 15 years ago” as T.I. can be heard adlibbing in the background. Following the ambitious “Go Get It” is “Guns and Roses” which features Pink and has all the makings of a song that’s gunning to be a potential radio smash. Produced by T-Minus, the song illustrates the ups and downs of a relationship that could have and maybe should have been over by now, but still continues upon the realization of how much both people mean to each other. Touching.

“The Way We Ride” is another braggadocious slow roller while “Cruisin'” is largely skippable although the ladies may dig it. “Addresses” is Tip at his chest-beating best. I’m a little bit out of the loop, so I’m not sure if the track is directed at anyone in particular, but if so, Tip is ready to address the matter at a specific address and settle it then and there. Skateboard P puts a lush touch on “Hello,” the silent wave to any and all would-be haters out there that features Cee-lo Green on the hook. “Who Want Some” is another standout track on the album, a throwback to the days of “Urban Legend.” Inviting anyone who has a problem with him to make a move, T.I. is quick to let it be known that he’s off probation, so it’s whatever. He even gives the finger to the ATF, as he raps:

“Man, play them games if you want to, all my niggas wit it
We can bang if you want to, let all you niggas get it
Off probation and I’m waitin’ for a nigga to jump
You disrespectin’ the crown, this double barrel I dump
Like ain’t he learned from that time that he done did in the pen
Here this skinny nigga go talkin’ ’bout pistols again
[…]
I calmed down for my kids and my mom now
Run up on them sucka niggas, you can put ya arms down
And FYI, I never put my arms down
Tell the ATF I got three more .380s left”

At the end of the track, the final “Trouble” skit re-enacts the events of the night that T.I. and his entourage were shot at in Cincinnati which ultimately resulted in the death of his friend, Philant Johnson. The skit leads into “Wonderful Life” which has T.I. rapping from the perspectives of the aforementioned Johnson and his father before replying to them both in his final verse. They both express how proud they are of T.I. and that he should keep on doing what he’s doing with his life and that regardless of the setbacks, he’s done well for himself. The album closes with “Hallelujah” as Tip elaborates on some of his other troubles and compares himself to various figures from the Bible including Job, Jonah, Lazarus and even Christ.

It seems cliche to say it, but “Trouble Man: Heavy Is The Head” has a little bit for everyone. There’s trap anthems, club tracks, jams for the ladies and inspirational numbers…it’s all here for the taking. At some points, it takes a few extra seconds of listening to catch the vibe of the song, but then T.I.’s charm reels you into the track. Some may take issue with T.I. seemingly reverting back to his T.I.P. ways in such a grand fashion, but I feel that there’s a good balance to things and more importantly T.I./T.I.P./whoever else is just being himself. The word is that there was so much material recorded for this album that there will be a sequel a la Ghostface Killah with “More Fish.” It’ll be interesting to see what kind of trouble Tip can get into on the next go around, but for now it seems like he has his fill. It’s safe to say that T.I. is back and just like Marvin crooned back in ’72, you don’t want to mess with this Mr. T either.