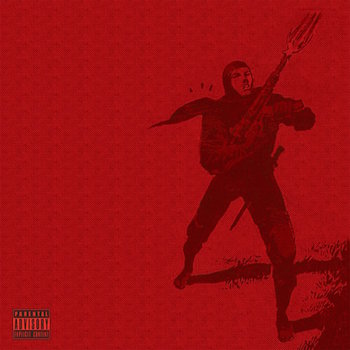 Lone Ninja is as deadly serious about his rapping as his name implies, and like the legendary assassins his rap persona aspires to, he moves in the shadows until his opportunities arise. Few artists we review at RR are as persistent (perhaps even relentless) as the members of the Holographic Pagoda fam. If they release a new album, they want to make sure we get a copy. If we get a copy, they want to make sure we are planning a review. If we are planning a review, they want to know when it’s going to be published. I walk a fine line between admiration of their hustle and exasperation that I’m being stalked at all times by a Ninja hiding in the shadows.

“Wave of Carnage” is the latest release from Ninja as a soloist, although I find he’s a better emcee when paired with June Marx as one half of the group Twin Perils. Nonetheless there are times when Ninja does rise to acceptable levels on his own. One way that Lone Ninja advances his own cause is through production, which is consistently one of the most interesting factors of their releases. The brooding East coast beats of JBL The Titan do Ninja justice on this CD, making tracks like “Defense Perimeter” acceptable head nodders to bang in your whip while driving around town.

My enthusiasm for tracks like this one and “Wave of Carnage” is tempered by Lone Ninja’s flow, which has changed precious little over the last 7 years. For the uninitiated, Ninja sounds like he was frozen in Carbonite, and everything other than his tongue thawed out once Leia hit the button. Bars wag around in his mouth like there are metal clips attached to either side of his tongue, mechanically pulling it in random directions. This is supplemented by a charisma that can be best described as non-existent, delivered in a monotone that even the late great Keith Elam would have been perplexed by. At times he’s just plain hard to understand – songs like “Valley of Hell” are delivered in a thick accent that we can say is unique to Ninja alone. Still on RZA-esque tracks like “Alpha Protocol” featuring June Marx, he achieves the appeal of a tertiary member of Wu-Tang Clan.

Herein lies the ultimate conundrum for me regarding Lone Ninja – I don’t hate anything he does, but I’m hard-pressed to highly recommend his art. At times I feel he and the Pagodians are trying to beat me down in the way a gentle trickle of water beats down a boulder – it seems impossible but given millions of years of erosion the water will ultimately crush its foe. I don’t have millions of years of patience though – I’ve got another 40-50 left on this mortal coil if I’m fortunate enough to avoid catastrophe and/or a third world war. The boulder can be moved, but the water never changes, and as far as I’m concerned that sameness has run its course. I need my water to have a different flavor. I salute the Ninja – he can declare victory – but I’m moving on.