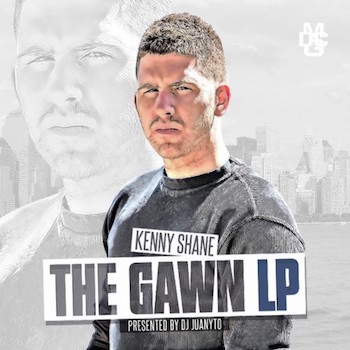 Following up on the “Eastbound & Gawn” mixtape from earlier this year, Kenny Shane drops his full length album known as “The Gawn LP.” We’re clocking in at 12 tracks and 47 minutes on this one, which makes it roughly equivalent to its predecessor – 14 songs and 46 minutes in length.

There’s a small amount of overlap between the two releases, though admittedly it’s worthwhile to have it for songs like “Chemtrails.” The Jux Soundz produced track floats along on an ethereal cloud of sound for 245 seconds, and is good enough that I could enjoy it as a rap or a straight up instrumental. That’s not to say Shane isn’t a worthwhile emcee – he has a pleasant voice and the ability to flip his delivery from slow to quick in a heartbeat. As he says himself, “Real s#%!, f**k a hook right now.”

The artist formerly known as That Kid Era brings along a lot of his friends from that era to ride with him, and features do help an up-and-coming rapper look more official. The biggest name among them is Troy Ave, who went from the cover of XXL to “New York City: The Album” in stores nationwide all in the same year. Shane takes advantage of of the exposure by spitting some thoughtful bars I can respect.

“I’m a pro with these verbs, I’m a pro with pronouns
Guess that this my profession, I get lost in pro-found
Intelligence is so elegant, but don’t mean that you wise
A wise man’s words are few and he can speak with his eyes”

That’s what will set Kenny Shane apart really – not his fascination with Danny McBride nor his chiseled looks (he’s either airbrushed well or he’s Eminem minus twenty years of hard living). Shane seems to desire more than just being the latest flavor of the month – he’d like to be heard but he’d also like to be heard saying “something.” That’s why subtle tracks like the Donato Beats produced “Finish Lines” suit Mr. Shane so well. It’s got that early 1990’s jazz-hop swag, and it lets Shane get out fly bars over the cool backdrop, “for that moment you are free, for that moment you will be you – in your purest form.” Cooooooooool.

There will be a healthy amount of skepticism about Shane, and in a year where Iggy Azalea got tagged a “cultural appropriator” that’s to be expected, but after listening to two Shane albums in two months I find that I’m not tired of what he has to say. If anything my curiosity has been piqued by his natural level of cool – he believes in himself but he doesn’t have to scream it loudly at you to convince you he’s good. Everything is understated about him in the right way – which even makes it tolerable when he occasionally indulges a desire to sing on songs like “Hope So.” Other rappers wouldn’t get away with it, but when Kenny Shane flips it with no AutoTune, I’m down. He’s not paying for the 5-6 figure producers, but he’s getting that level of quality from the likes of Fresco Stevens, Wonderlust and Mad Money – showing he was as selective with the tracks he raps on as the bars he wrote. I’m going to be checking for more of Shane in 2015.