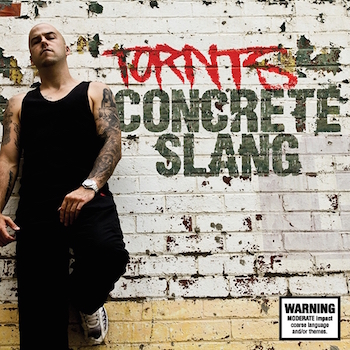 “This is the Australia that most people choose not to see: crime, violence, poverty, drug problems, racism, dispossession, and a general apathy and anger at a society that increasingly ignores some sections of itself.”

Replace “Australia” with “United States” and the press sheet for Tornts’ “Concrete Slang” could apply equally well to any new release from a young and hostile rapper here. These days the themes are increasingly universal – a world where the resources and power are hoarded by the elite while the starving poor are left to fight for the scraps that are left. Tornts has always harnessed that anger for dark brooding albums that are regarded at times as horrorcore, and listening to a track like “Venom” it’s not hard to see why.

“Barely alive – my spirit just talkin’
Spittin’ the pain like I got no endorphins
Nordic invader, insatiable hater
of laymen burst through the underworld
like a fatal shockin’ fuckin Raiden
Stamp out maggots you maiden
Badmouth habits degradin’, Melbourne murker
Dominate the country, a military coup d’etat…”

Any rapper who can brag he’s “darker and deader than the BP oil slick” is perfectly comfortable over the grimy, bass heavy Bonezy 2 Bladez beat of this track. The only thing thicker than the bass is the vocal tone, which makes Michael Schiavello sound like a Yankee by comparison. The closest you’ll get to “upbeat” from Tornts is a track like “Traumatic Cinema.” I’m not kidding – you’ll watch this video and think I’m joking – but this tale of being beaten, choked and abused as a child is as close to positive as it gets, because the racist father who calls his kid a coon “does the world a favor” by committing suicide. Yikes.

Producer Wik certainly plays to Tornts’ strengths – grimy beats where he can lay out his macabre tales. That’s when Tornts is at his absolute best as an emcee. If tracks like “As the World Spins” remind you of Swollen Members it’s not a coincidence – in fact Tornts and Madchild would be a formidable rap duo. Still the dour acerbic rapper is not as anti-social as his raps would suggest. Ciecmate, Gaz Hazard, Fluent Form and Jake Biz guest on “Keep That Mouth Shut,” Hosper the Horrorble drops in for the somewhat confusingly named “Eight Bar Crime” (trust me it’s longer than that), Brad Strut is on “Smack Dust” just to name a few. There are guest stars throughout “Concrete Slang,” even though Tornts is rapper enough to survive 16 tracks without them. Still when it’s posse all in on “Shadows and Swine” you not only appreciate it but find the “f#%! the dirty coppers” theme resonates to the present day.

Even on self-produced tracks like “The Rain,” Tornts serves himself well, with a boom bap beat and wailing backdrop that sets off his harsh chorus “those were the days/caught in the middle of a plague.” His earnest desire to see all the evil of the world washed away recalls “Black Hole Sun” by Soundgarden, and no one ever bemoaned Chris Cornell as being too horrorcore of a lyricist. Tornts won’t shake the rap that he’s heavy, but rather than apologize for it, he embraces his dark nature in an album that will please his constituents and anyone brave enough to give “Concrete Slang” a try.