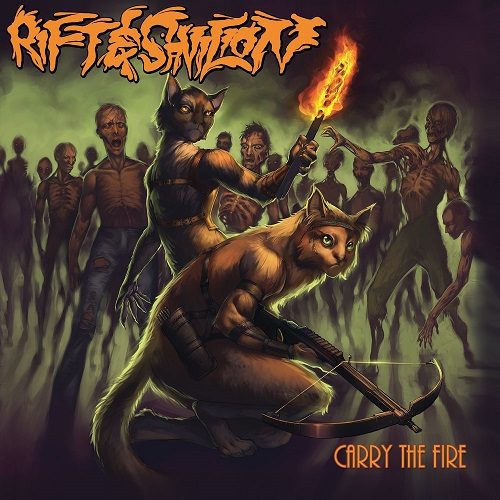 If you know Savilion by now, it’s probably from our extensive coverage ofSwamp Thing, as he makes up one-third of the Canadian all-star trio. Rift is a little harder to nail down. He was one half of a rap duo called Bending Mouth who released two albums in the early 2000’s – we didn’t cover either of them. He followed that up with several solo albums under the name Selfhelp – and I can honestly say nobody sent them our way or even mentioned we needed to write them up. Suffice it to say we’ve accidentally ignored him for over a decade, but he’s been working hard on the hip-hop scene for that entire time.

A new year and a new deal with Hand’Solo Records might be the antidote to our ills. Savilion takes the lead on production and drops a few bars here and there, but as the press release notes “Carry the Fire” is really Rift’s show verbally. This is the time for Rift to make his case that we’ve been sleeping for far too long. Rift isn’t just an artist – he’sinspired by artists – and although she’s been gone for 60 years Rift’s rap about “Frida Kahlo” proves she’s far from forgotten.

“A skeleton’s pain, lifted from a tragic heart
And screams of rebellion that remain trapped within her magic art
It’s those feelings that depart, and leave you back at the start
Souls move through ceilings, lifespan infinite beyond Dada charts
I close my eyes and ask what Frida would like to say
I saw blood pouring down a staircase on a holy Sunday
I saw a series of red candles dripping wax into an open wound
and I saw an unborn child come to life inside a broken womb
When our bodies are at the weakest our minds show resilience…”

The song wanders back and forth between admiration and autobiography, as Rift is referencing the pain of Kahlo’s life (including her infertility as the result of a terrible accident) and how she lived in pain for the rest of her 47 years on Earth, yet still found the artist’s canvas a way to transcend her physical limitations. Perhaps this duo aspire for the same on “Ace of Diamonds” – a whistling boom bap rap with Method Man samples scratched in.

“So f@%! it all, I’m gonna write until I’m dead/no longer can I keep the darkness trapped inside my head.” There’s a physical pain involved in carrying fire, but even with the burns and scars there’s still beauty in the bars. Even the normally jocular Wordburglar sounds seriously poetic guesting on “Take You Higher” along with Chokeules and Geneva. “F@%! Dead Presidents” is the ultimate anti-pop rap song with a huge all-star cast: Ceschi, More or Les, Jesse Dangerously, Sulfar, Mikal kHill & Mindbender all join the mix and vow to spit “no Rick Ross bulls@$#.” I don’t think there’s any to be found anywhere on the album – it’s just hot fire “Dragon Jargon.”

There’s an upside and a downside to “Carry the Fire” only being 31 minutes long. It’s an easily digestible album at that length, but it doesn’t feel nearly long enough for Rift to make his case about being slept on. It’s not even ten tracks long really, as the “Intro” takes up a minute of the presentation without adding anything significant artistically. While tracks like the jazzy, organ-fueled “Into This World We’re Thrown” show the kind of sound Savilion is capable of crafting for any artist, it’s exactly that – not indicative of a signature Rift style or sound.

“Carry the Fire” is interchangeable hip-hop, and although Rift is clearly a compelling and intelligent voice in rap that needs to be heard, there’s an air about this album of two like-minded Canadians who said “We should do an album together someday” and finally sat down to put out a half hour of hip-hop. It’s not rushed or forced, it’s a quality album, but it’s not as deep as a Kahlo painting. Her vivid self-portraits explored the meaning of life and death in unforgettable ways. Rift aspires to be like her, and his yearning is palpable, but after just a half hour my exposure to his rap lacks the permanence of her art.